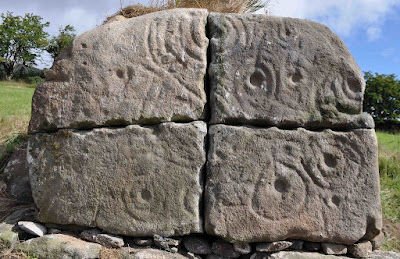 If, as the Guardian of the Ringstone, I know a little bit about splitting rock, it's largely through talking to my neighbour Niall Deacon. Niall was born and grew up to be a sheep-farmer in Ballinlug, just across the borrrder in Wexford. He tolerated this ill-fitting skin, until, like Bill Bryson, he had an epiphany in his 40s to realise that he didn't have to be defined by the number of sheep he could shear without getting back-ache . . . and recognised his true self to be a stone mason. A bit like the girl who invented herself. Niall owns the resolute digger which did the heavy lifting during the reassembly of the Ringstone in 2010.  But he'd given me a day's work already after we saved one of our sagging granite out-sheds from final collapse and put a new roof on it. I had fingered two flattish slabs of rock out in the fields to serve as the threshold and window-sill of the new shed.  Niall came with his tools (mechanical digger; con-saw; club-hammer; cold-chisel) and trimmed off the excess to reveal a perfect fit for both narrowly constrained gaps in the fabric of the building.

It was a joy to watch him using both modern machinery and iron-age hand-tools with equal competence. He even went so far as to 'distress' the surface of the threshold because he was concerned that the naturally smooth surface which had so attracted me would, in winter ice, slip me arse over tip. While he was rhythmically moving his left [chisel] and right [hammer] hands over the surface and edges of the stone, he was able to talk about his craft.  How you had to let the hands do the thinking, so that you didn't need to (must not!) look at them as they ranged over the work. He also talked about moving impossibly big stones set awkwardly in the middle of fields in the days before the brute-force of caterpillar diggers became available. His uncle had taught him a lot about stone because there was a helluva lot of stone on his farm.  It was important to use the least possible energy to achieve your aims and one of the techniques was to use a series of steel wedges to split the stone as you wanted it split; not as it might naturally tend to go along the crystalline structure of the rock.

I was reflecting on this when I saw an extraordinary clip [via Kottke] of Il Capo in a marble quarry, using minute hand-gestures to make two enormous machines do his bidding.  L'uomo - we can move mountains!
Posted by BobTheScientist at 08:27