After the Darwinday storms I went up the hill behind the house to look at the Coillte forest that was planted 35 years ago on Dreelan's farm.  O'Manch had reported that there was quite a bit of wind-throw on the edge, including one tree that had blown down against the prevailing wind to lie across the path. I was surprised at how little damage there was - they say that the Sitka spruce Picea sitchensis plantation on White Mountain, 15 km South of our place, looks as if Hurakan god of storms had scythed it all down.  This is predicable as native Sitka grows in extremely wet soils, and is genetically programmed for a very shallow root system: that's partly why it is so extensively planted on marginal land. What really surprised me however was the fact that several trees deep in the Dreelan forest had snapped off 5-10m up with no evidence of them having been struck by a falling tree.  I suspected that this was due to harmonic resonance when the wind was gusting at just the right speed to treat trees of a particular height like an insufficiently elastic violin string.  I've floated this idea past a number of tree chaps and nobody has said it is complete bollix.

Yesterday was the anniversary of another example of harmonic resonance: the collapse of the Broughton suspension bridge in Salford. On 12 April 1831 a platoon of the King's Royal Rifle Corps returning to barracks after an exercise out of town were amused by the fact that the bridge appeared to bounce in time with their marching step. It's not often that squadies get access to a fair-ground ride while in uniform. Some of them exaggerated their step for a lark which was enough to snap a defective bolt and the bridge collapsed into the water 5m below injuring some 20 soldiers, some seriously.  That caused a policy change in the British Army requiring soldiers to 'break step' when crossing any bridge and you can still see notices advising this on the end of some bridges.  Marching soldiers may have the capacity to collapse bridges but the wind definitely does: thrilling newsreel footage of the collapse of the Tacoma Narrows Bridge in 1940.  In that case, the wind was far less (about 65km/h) than the Darwinday storm but it was just the right speed to sustain and synergise the movement, like a child thrusting her legs back and forth to get a swing to reach the very sky. When the London Millennium Bridge was opened in June 2000 synchronous movement by large numbers of pedestrians caused a resonant lateral movement of the bridge which came as a total surprise to Arup the consulting engineers. 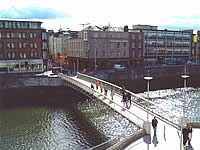 There is a study to be done, or at least a Blob-post to utter, on the empathic movement of strangers walking along streets in the same direction - Arup assumed that these would be random but they were wrong!  Dublin has her own Millennium Bridge, like London's limited to pedestrians so more more engineering than architecture. I always feel a little queasy crossing it because your foot doesn't make contact with the surface quite when you expected it to, so it is a little like trying to cross the deck on a large ferry at sea.  This detectable bounce is generated by the people walking around me - and my enormous self, of course.

Resonance is not only an issue for horizontal engineering projects, it is also, like the trees in our forest, a significant issue for vertical hubris such as the Burj Khalifa (830m) and Taipei 101 (510m), recent holders of the World's Tallest Building title. (Empire State Building 380m). Taipei 101 springs up in a region prone to typhoons and earthquakes, so cannot be built out of Lego.  As it gets higher any structure gets heavier and the foundations need to be more massive. Nevertheless they embedded a 660 ton harmonic mass damper (see right hanging on its suspension cables) near the top of the building.  This sphere is 5.5m in diameter! Dublin's Spire in the middle of O'Connell Street, known by local wags as the stiletto in the ghetto, although only 120 m tall, incorporates a mass damper so it doesn't bend itself out of shape in a breeze of the resonant frequency.
Posted by BobTheScientist at 06:43