Alors mes gars, j'ai promis de trouver quelque chose d'intéressant sur Clermont Ferrand. Mais c'est plus facile à dire qu'à faire.
When I was a guest of the School of Engineering for dinner the other day, the key-note speaker was introduced by the head of the college by telling a funny story about Le Grand Fromage. Later when I was fact-checking for my Blob, I found that same story was the 4th hit with Google. If The Provost was a journalist, I'd probably chid him with being too lazy-arsed to dig up something novel. But then as the head of a large corporation, his diary is full of similar events and he has to write his own speeches - in contrast to US Presidential candidates, for example.

I should be a little more sympathetic: in trotting out my 600 words a day, some Blobs turn out more timeless and insightful than others. If I didn't have a day job and a certain requirement for sleep, I'd find more time for reading and research and to polish the final draft. Sometimes you can throw in the towel and start making ironic comments. When I worked in England, long before the WWW and friendface, it was the custom to send a picture postcard back to the workhouse while on vacation.  It was a courtesy and mostly harmless "having a lovely time, wish you were here" gesture. But the accumulated pictures on the coffee-room notice board got to seem all too samey after a while - sunsets, white-sand beaches, La tour Eiffel - so that there was barely a twinge of envy that we the recipients were still choosing between a Kit-kat or a Twix at the Office. Some bright spark sent in a postcard of a campus office block with the message "this is an entry in the most boring postcard competition".  That appealed greatly to the well-developed English sense of irony and started off an spate of increasingly banal picture postcards.

Mais revenons nous a L'Auvergne! If only the task was to find something interesting about the Auvergne; why you could just listen to Canteloube's chants d'Auvergne for half an hour. That would set you up for the day.  Microbiologists could muse about the cheeses of the Auvergne - Cantal, Saint Nectaire, Gaperon until the cows came in for milking.  What can we say about Clermont-Ferrand? I asked the folks at QI but they came up almost empty. The WWW te1ls us that 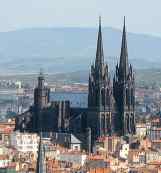 You see, it's clear that we are scraping the barrel a bit here. Here's the lazy-arse GoToogle site for those who want 15 C-F soundbytes. I guess the most well-known picture to come out of C-F is Bibendum the Michelin Man [see L early avatar and top newer, cuddlier], the brain child of Édouard and André Michelin the tyre people. Their company Compagnie Générale des établissements Michelin SCA still has it's headquarters in C-F.


Here's a nice essay, from the advertising design perspective, on the evolution of the cartoon chappy that drinks up obstacles on the road. And here's another: apparently there is a whole book written about the icon and its development. There is museum to the company L'aventure Michelin which is ironically located in the old factory where Michelin used to make tyres. Making tyres in C-F is history because although head-office and The Suits remain, the manufacture has been shipped out to where the labour is cheaper. Santé!
Posted by BobTheScientist at 08:18