Today, 16th June, we have plenty to celebrate.  It's Bloomsday (the day on which James Joyce set Ulysses) for the literary and it's Father's Day (yet another day on which you are required to support Hallmark Cards) and for trekkies it's Captain Picard Day.  Then there are the birthdays:
Take your pick, mates, but I choose McClintock (and it's my blog so I get first dibs).  She spent the last 70 of her 90 years immersed in science.  A large part of it immersed in corn fields crossing Zea mays plants just like I spent part of the summer of 1976.  Here's a picture to show her extraordinary stature, hanging out with the boys: 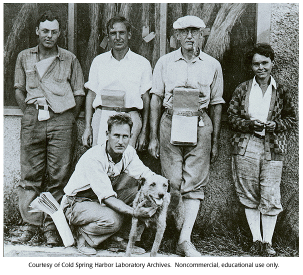 You might think that 'stature' is a cheap joke at the fact she's the smallest chap there apart from the dog.  But you'd be wrong as the caption says "Barbara McClintock as a graduate student at Cornell, 1929. (L-R standing) Charles Burnham, Marcus Rhoades, Rollins Emerson, and Barbara McClintock. George Beadle is kneeling by the dog."  The boys with whom McClintock is relaxed and relaxing are GIANTS of mid 20th century plant breeding and genetics.  Beadle bagged his own Nobel in 1958. I love this picture, she is so happy in her own skin, happy to be doing the grunt work, her 10,000 hrs.  The funny sporrans that Rhoades and Emerson sport are bundles of paper bags - as essential for corn-breeders as a hammer is for a geologist.  You pop a bag over the tassels at the top of the plant to catch the pollen and/or over the female flower to prevent stray pollen screwing up your cross.

McClintock's journey was harder than most, she has the distinction of being patronized by more of the greatest geneticists who ever lived than any other person. Most of the women in science could be safely ignored as they typed up the manuscripts and made the tea for The Men.  McClintock left her mentors and colleagues of 1929 and pursued her own nose for what was interesting in genetics using a minority organism rather than the lab mouse or Drosophila.  Remember that 1929 was 24 years before Crick and Watson 'discovered' DNA, so molecular biology hadn't been invented.  One of her early huge contributions was to show that a particular knobbly anomaly on one of the chromosomes of corn exactly tracked the expression of a particular characteristic in the adult plant. This required years of careful crosses (generation time in Drosophila is a couple of weeks, in corn it is a full year), meticulous record keeping, and a double life with her own sheaves of paper bags in the hot corn-field sun alternating with hours in a laboratory staining specimens and squinting down a microscope. By this hard graft she established a base-line of how inheritance worked in her organism and published a map showing where all the genes then known were located on their respective chromosomes.  She was developing her peculiar, particular, unique feeling for the organism in the evocative phrase used by Evelyn Fox Keller for her biography of McClintock.

Then she noticed cases where the inheritance was not straightforward.  She became intrigued by 'variegation' where some of the kernels on a cob or some of the cells in a kernel would have a different colour to that of their reg'lar sibs from the same parent.  Oh ho, she thought, new mutant, that's interesting.  But the colour of these weird kernels was not stable.  It would be there in one generation and then disappear and then pop up again.  Remember that each cross she carried out to try to nail down what was going on took a whole year.  I have this idea, I'll try this experiment, I'll put another candle on the birthday cake, and I'll check the results.  Dang! that's a bust  . . . but I have this other idea . . . und so weiter as Gregor Mendel might have written during his own decades-long hunt for reason and mechanism in the living world.

McClintock's feeling for the organism developed to a most extraordinary degree until she could think herself really small and become a particle inside the cell that was jumping about from chromosome to chromosome.  If I jump thus, I disrupt this gene and the cell I live in will grow up one colour, but then if I side-step and jump so the colour changes again.  She knew how it worked, knew it didn't only affect colour, knew it was of staggering importance to genetics and so she went out on the circuit to explain and publish her findings.  And it was like she was talking in a dream, she'd look out into the audience and see only bafflement on the faces of the men (it was almost entirely men of course).  And they would patronise her afterwards - suggesting that she couldn't do the math or that her methodology was faulty - and snicker at the bar that evening about how odd she was.  So she stopped going to meetings and carried on crossing corn year after lonely year, until in 1967 at the age of 65, she officially retired. 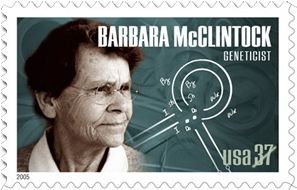 Then it all lurched the other way. After about 20 years in the wilderness her work on genetic control and regulation was replicated in other organisms initially by the late great Francois Jacob  and Jacques Monod.  To call it rehabilitation would be to grossly understate the reaction.  Everyone was falling over each other to heap honours and hard cash upon her.  In 1979 she was given honorary degrees from Harvard and Rockefeller Universities.  In 1981 she was awarded the very first MacArthur Fellowship, as well as a Lasker Fellowship, the Wolf Prize and the Morgan Medal.  The Horwitz Fellowship followed  in 1982 and in 1983 the Nobel Prize for Physiology and Medicine - not bad for a woman who'd worked on maize all her life.  And in 2005, 103 years after her birth she made it onto a US stamp.

She has become the poster-girl of role-models for young women in science.  The easily told story of "the struggle, the triumph" that sanitizes and codifies McClintock's life and contribution has become inspirational children's books about her life. The 10th Anniversary edition of her biography comes with quizzes and worksheets so that it can be used as the basis a Women's Studies module.  But this is to diminish her, she was much more than a woman, she was a shape-changer: both infinitely small and larger that the century that was coterminous with her life.  And she was happy:
"I was just so interested in what I was doing I could hardly wait to get up in the morning and get at it. One of my friends, a geneticist, said I was a child, because only children can’t wait to get up in the morning to get at what they want to do."
The Blob's women in science series: Florence Nightingale - Barbara McClintock - Maude Delap - Cliona O'Farrelly - Lynn Margulis - Rosalind Franklin - Jocelyn Bell Burnell

Posted by BobTheScientist at 01:19