Shortly after we moved into our farm in the mountains, my parents came to stay for a week. It wasn't perfect timing because we had committed to taking the girls off site for two days in the middle of their visit. But it wasn't wholly inconvenient either because we had an orphan lamb that was close to weaning and a dozen sheep to look at a couple of times a day. My father, not the most practical chap on the planet volunteered to feed Flossie the lamb while we were away and we set off with reasonable confidence. When we returned the following evening he was clearly relieved, so we were momentarily anxious:
"How's Flossie?"
"Flossie is fine, but where's the bloody light-switch for the kitchen?" 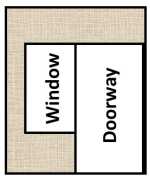 Woot! The position of the light-switch had been a bit of a problem when we gutted out the old farmhouse and reconfigured the rooms in consultation with architect and builder. The entry to the kitchen from the hallway was constrained by a massive central chimney-breast [L in diagram] and the 500mm thick granite rubble-in-courses outside wall [R in diagram].  We wanted to get as much light into the kitchen as possible so a) put glass in the top half of the door b) asked for a good big window next to the door.  If the door was to open against the outside wall as seemed obvious, then the switch would have to sit at the top of the dwarf-wall under the window and next to the door. At mid-thigh on and adult man, it was a convenient height for the girls who were then but little and we quickly got used to it. My poor parents, not stupid by any means, hadn't been able to crack the logic and had been cooking their dinner early before the sun went down and the kitchen was plunged into darkness - luckily it was Summer.

Where to put switches is a design thing, which is dealt with at some length by Don Norman's book Design of Everyday Things [prev], which I've just finished. Why, he asks, are the on/off switches of computers on the back of the machine?  The book was written in the 1980s, but designers seemed reluctant to put the the button front-and centre.  I can remember a generation of machines where the switch was a whole arm-length away on the side of the box. Remember IBM Selectric typewriter? Its on/off switch was underneath the machine, you had to feel for it! Who thought that was a good idea? Norman's design sense insisted on the electricians coming back to his new lab in San Diego to put the light switches a) near the door and b) so that they mapped the position of the lights in the room.

I was tribbing the design features of my Toyota Yaris the other day, partly because I been driving for a long time and car-design has improved immensely over that period. Hats off to the engineer who decided to have a split back seat in hatchbacks: so you can carry three passengers and a chest of drawers. There was a time in the 1980s when you could only achieve reverse gear on some cars [Opel!] by lifting a flange at the top of the gear lever with your first two fingers.  I first met this 'feature' in a rental car driving 500km from Newcastle upon Tyne to London in 1984. We left the motorway halfway down and pulled into a field gateway for a picnic lunch . . . I couldn't reverse out of the field!  We had to push the car back on the road and stop at a Vauxhall/Opel dealership in North London to learn the reverse engineering trick.  Norman's point about the gears would be that the solution to the reverse-gear problem was arbitrary and poorly indicated and therefore opaque to novices.  Good design for life makes it harder to do the wrong thing and obvious what is the correct action.  Don't blame yourself if you can't make the faucets or the hand-driers work in public rest-rooms. The fault, dear Brutus, lies not in ourselves but in the idiot engineer who won a prize for designing a tap that looks well and works wonk.