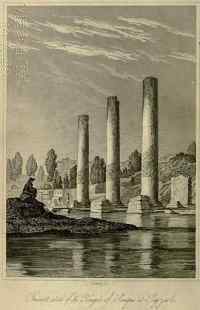 . . . is a very long word, how do you spell it?  I-T, the children cry! How do you spell 'it' - geddit?Uniformitarianism is also a key tenet of Darwin's theory of evolution. The idea was most convincingly articulated by Charles Lyell in his book Principles of Geology: being an attempt to explain the former changes of the Earth's surface, by reference to causes now in operation. That's it really, what it says on the tin: you don't need to invoke Noah's Flood or aliens from space or the deity to explain the changes in the restless Earth or the pretty pass at which our blue planet has arrived. Being a Victorian, Lyell consolidated the fundamental idea by writing 3 long volumes published 1830-1833. Lyell was 10 years older that Darwin and was something of a mentor to the young chap when he was starting out, especially on aspects of geology.  Darwin wrote his own heavy books relentlessly accumulating examples and evidence to make his arguments that species are not immutable. One of the striking bits of evidence for a very different past was Darwin's discovery of fossil sea-shells high up in the Andes. They couldn't all have been brought there by sea-gulls, so he surmised that some millions of years previously the plateau on which he was gasping for breath had been on the sea-floor. Millions, schmillions what about hundreds of years?  How much could the Earth have moved in historical times? A mind-boggling key to that debate was the Temple of Serapis, which featured as the Frontispiece of Lyell's Magnum Magnum Magnum Opus. The area was excavated in the mid-18thC to expose the foundations of three pillars that emerged from a vineyard in Pozzuoli in S Italy. Geologists and antiquarians was amazed to reveal a band of small holes like a tide-mark in the pillars. They agreed that these must be made by small marine molluscs of the genus Lithophaga the rock-eater. The holes are not 'holes' they are gastrochaenolites named for another genus of stone-boring molluscs Gastrochaena spp.

The significance of this observation depends on integrating knowledge from history, geology and biology. We know when the temple was built (about 200 CE) and we know that the molluscs are marine. The conclusion must be that the pillars were built on dry land 1800 years ago, collapsed gently into the sea for a good long while and then re-emerged . . . apparently several times - without toppling the pillars. In the last 30 years alone the area has ascended about 2 metres and will presumably sink again. With that sort of data, the uplift of the Andes or the Himalaya seems entirely reasonable - you just need a bit more time. Nevertheless, the conclusion that the Earth is so dynamic is scarcely credible. 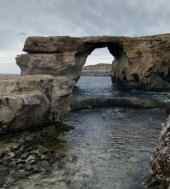 Of course what goes up must come down under the relentless pressure of gravity and the ravages of weather.  Why just last week the Azure Window [cLipped from Google maps] aka it-Tieqa Żerqa, an extension of the West coast of the island of Gozo, the second biggest island of the Maltese archipelago, collapsed into the sea. If you were planning to go see this natural wonder this Summer - or jump off t'bugger - you're toooo late and google is going to have to retake their panorama-pictures. This sort of thing is happening all the time [prev] but is rarely captured on camera. Exception to that rule: cliff collapse Cornwall Oct 2011. Not least because they tend to happen under really crap weather conditions and nobody wants to get their camera wet. Of course, the changes in height of the Temple of Serapis are far too slow to capture, even on movie film.
Posted by BobTheScientist at 06:37