You'll have to take my word for it, I'll never find a reference for this story. Ireland was mapped in the 19thC by teams of land-surveyors: chains, theodolites, triangulation and wet socks. Cost of labour has rocketed since the 1840s, so when the Ordnance Survey of Ireland needed to update their maps 30 years ago - because the pace of change and development was hotting up and the 1911 survey didn't show a rattle of by-passes, bridges and housing estates. This obsolescence of old paper maps benefitted me last year when I purchased the whole SE corner of Ireland at 1:50,000 scale. So the OSI put out to tender a contract to capture the landscape in precise series of overlapping aerial photographs. The company that won the tender had looked at Irish weather, the size and speed of their Cessna and reckoned that they would budget 18 months to be sure to be sure of getting enough cloud-free days to cover the country. They started in early Summer in the midst of a rare anticyclone, flew all the hours of daylight and finished the task 15 days later: Win!

The gossip is that the Department of Agriculture does it all by satellite now, snapshotting every field every five days. That may be just a rumour to stop farmers burning their hedge-clippings and throwing their plastic silage wrappers into the bonfire. You may be certain sure that the Dept Ag doesn't have the manpower to analyse all these data: they are too busy drinking tea and doing sudoku at their desks.

Photo-technology has moved on mightily since the 1990s. You just think Google Streetview. My students capture the view down their microscopes with their smartphones . . . which is a little annoying. One of the most amazing technologies matches the macro with the micro and uses LiDAR to detect minutes variation in height over swatches of countriside - even when the hard surface is masked by vegetation. We know what LiDAR is and how it works but their isn't consensus on what the acronym means; eithee  light detection and ranging OR light imaging, detection and ranging. See The Blob on APGAR for a backronym. 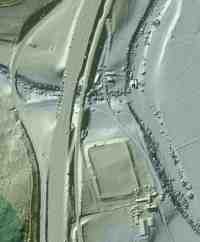 The UK Environment Agency has taken out a contract to map the whole country from the air using LiDAR. They are hoping to discover wonders like the layering of a modern motorway and a 19thC farmstead on top of a Roman fort and its associated access roads [L].  Bloomin' amazin'. The amount of data when you map the entire country at 1 metre resolution is impossible to store, let alone process, without a huge server. But these data are going to be made freely available to industry and Josie Public and you may bet your sweet bippy that the data are going to be put to some quite unforeseen creative use.  there are 11 terabytes of data in it which has been downloaded 500,000 times and stored on another server somewhere else. That's a LOT of bytes. But it still is a microdot compared to the trillion crap photos which are uploaded to The Cloud every year . . . never to be seen again.
In England, even if there are some occluding trees, you can still get access to the interesting sites for field work on the ground. It's a bit different in the Central American jungle where the storied vegetation fills the sky from ground to 50m up and then cascades down again as lianas, vines and thorns.  With LiDAR you can strip away the jungle to reveal a whole network of interconnected Mayan cities where nowadays only people with blow-guns hunt for a bit of bush-meat. And the mapping data doesn't stay on the server; chunks of it can be downloaded onto a laptop to create a virtual reality landscape linked to GPS. The archaeologist can image the next pyramid invisible in the impenetrable jungle and make a direct bee-line for the gods of the Maya. Asombrosamente increíble!
Posted by BobTheScientist at 07:11