Not Now, not Now! Then, as in the past. There is a reason I tend not to read fiction. Facts, science, non-fiction is about the thinking truth; the rational bit, that can be represented in a graph, which even if fuzzy and uncertain, is trying to explain the external world. There are, of course, shelves, libraries, full of non-fiction that has very little to do with science. Wade Davis's history the British assaults on Everest in the 1920s is largely about interpersonal relationships rather than geology. Fiction otoh conveys a visceral truth: rage, hate, betrayal, terror, surprise . . . none of which I handle well. 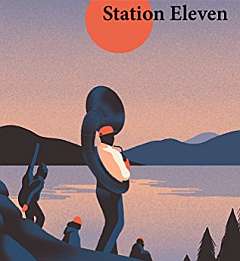 But I can obey orders. When Dau.I the Librarian flags a talky book on Borrowbox and says read this you'll like it, then I do; not least because she may know me better than I know myself ["a low bar" do I hear from the wings?]. Emily St.John Mandel is a Canadian writer, her fourth book Station Eleven ["SXI"] came out in 2014. It's all about the Georgia Flu, a coronavirus of devastating infectivity and deadliness which kills 99% of humanity; and what happens afterwards. It was well received and won prizes and an HBO miniseries based on the book was scheduled to start shooting in . . . January 2020. I guess we're still waiting. But I also guess that the current feeble attempt at a real global apocalypse has seen a boost in sales of the book.

Natural disaster kills all the extras matches the description of The Day of the Triffids, a favorite of my 12 y.o. self. So there is that in SXI's favour. But in the intervening 50+ years my autonomic nervous system is much less finely tuned and I found myself a-flutter with a sense of empathic dread from about half-way through the book. There were bad hats and there was death in Triffids; but back then I was going to live forever and I read on through the horrors to relish the next inventory of stuff to be looted from an abandonned warehouse. Early Wednesday morning, I snagged my smartphone, binoculars and a hat and set off for a long walk up the hill behind out house. I was hoping for buzzards, but also hoping to finish the bloody book and lay the ghosts that had been crabbing at my shoulder since the previous weekend.

Happily [not much of a spoiler] the worst drivers of my anxiety were resolved about an hour from the end and the author had a chunk left to develop a fundamentally optimistic view for/of The Future. You know that thing where you're in a car and you hear a story or a song which is forever associated with that stretch of the road? I'm afraid that the map of our hill is getting pinned with my emotional overloads. A rushy path SE of St Fursey's Altar is bloody with the obstetric disaster which finished Adam Kay's career as a doctor. The road to the North is now marked [more blood indeed] with a key encounter from Station Eleven.

As well as using the same Armageddon trope as Triffids, Station Eleven has a blurb that reads similar to that of The Illusion of Separateness by Simon Van Booy: in both, a generous handful of people are revealed by a series of flash-backs to have surprising connexions. YMMV, but for me van Booy's book was artfully contrived but fatally retrospective and self-indulgent. While Mandel, for all the vivid writing and imaginative vision, is trying to say something about the human condition which has meaning beyond the book.

Recommended, especially for toxophilists? [deadly]
Posted by BobTheScientist at 07:50