I'm guessing that many Europeans could name some of the Great Lakes (of North America) and at a pinch name (most of) them: Superior, Huron, Michigan, Erie, Ontario. A lot of the naming rights were taken by Francophone voyageurs and coureurs de bois, who roamed the Great Lakes Region by canoe or on foot making a living by trapping a trading with the First Nations. Sault Ste. Marie names the rapids between Superior and Huron . . . and cities on the Canadian and USian side of the channel . . . and the might Soo locks to raise ships safely to the superior lake. D'etroit is on the narrows between Erie and L. St, Clair which is the smallest of the great lakes; although still 3x bigger than our Lough Neagh.

Lake Ontario is different because it is 100m lower than L.Erie - half of the drop being accounted for by the Niagara Falls. The other lakes are between 173m and 183m above sea-level and Big. L.Superior is about the size of the island of Ireland, while Michgan+Huron+Erie are together a little smaller than England+Wales.

The Lakes are handy for transporting bulk goods like grain, iron and coal and the ships - lakers - can be huge. They don't travel fast but they can carry as much as 1,000 18-wheeler semis. If your lumpy, goods need transport among Buffalo, Chicago, Cleveland, Duluth, Detroit, Gary, Milwaukee or Toledo and there's no great rush, then lakers are yer only man. I heard about the Detroit River only a tuthree months ago because a couple of lakers were recorded racing for access to the said river in 1992. I assumed that Detroit the city had, for reasons, been built a little way from the shores of Lake Erie and that freighters came up river to unload, like container ships come up the piffling River Liffey to the Dublin Docks. Or indeed the docks of Duluth up the St Louis River. 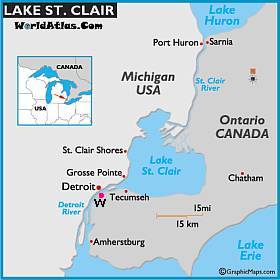 Wrong! The Detroit River is a mighty thoroughfare 44km long between Lake Erie and Lake St Clair. A similar situation holds from Lake St Clair to Lake Huron by the St Clair River. These three lakes are essentially the same height although the water always flows from Huron to Erie. Windsor, Ont. [W on map L] is in the peculiar geographic position where its citizens have to drive N to visit the USA. Something in excess of 100,000 jobs and $10bn in trade depend ways to cross the Detroit River. The main conduit is the Ambassador Bridge which soars 50m above the level of the water and takes 10,000 commercial vehicles daily M-F. It costs $5 each way for regular cars but . . . the bridge complex also offers duty free gas so drivers can fill up their tanks, saving about 40c/lt compared to Ontario prices. Remarkably for such a crucial infrastructural resource, the bridge is in commercial private ownership.

Nicely the traffic at right-angles underneath the Ambassador Bridge is served by a public utility in the form of the Detroit River mail boat. This is the JW Westcott II, a 14m long motor boat docked on the Detroit side which has an exclusive contract with the USPS to deliver mail to passing freighters on the fly. You can see the Ambassador Bridge in the background. Much joyful honking from both sides after each transaction: ". it was not uncommon for a boat to have 2 or 3 guys aboard that could name the ship by the sound of its horn"  . The same boat collects and delivers river pilots, vid also shows the central part played by the mail bucket. Example address: