I'm an Old. This means that, for a lot of internetty things, I was there at the beginning. I sent my first transatlantic email in 1983 when I came back to Europe after 4 years in Boston. Life was hard: the UK's Joint Academic Network JANET started to put order and consistency on domains and, hence, email addresses the following year. My email was bob.sci@uk.ac.ncl.gen; my pals back in the USA had @bio.bu.edu addresses because they were following the DNS [domain name system] big-endian convention. Eventually the Brits had to curb their empire exceptionalist little-endian tendencies and turn their address convention 180°. Before that, tireless programmers had to write software to read addresses and flip them as needed to that they get to the right destination. The joke / urban legend was that lots of mail destined for computer science [.cs] departments in IK universities was being delivered to Czechoslovakia [also .cs].

In 1995 I was set up one of the earliest WWW servers in Ireland and created web-pages for it in raw HTML: all the tags added by hand. HTML was so clever and efficient, text got wrapped at the end of each physical line; unless you specified a </p> paragraph or </br> a line break. If the text contained the information, then the signal-to-noise ratio was excellent. A document would be only a few % bigger because of the scattering of formatting tags. It would therefore be readable instanter even if the data had to be transmitted over a dial-up copper wire up the Congo. The information is the same whether it's in Helvetica or Georgia. Not good enough any more! Web-design is about the user-experience and seduction to buy; even if the product is only Megacorp's reputation.

A dozen years ago I wrote a webpage for work which consisted entirely of links to other webpages; initially so that I could efficiently run courses in bioinformatics. Then I was sacked the money ran out and I no longer had sys$admin privileges; and I stopped running courses as well. But the concept was sound and I used one of [sites] the many useful services provided by Google to write a similar page for me that I could use as my HomePage both at home and work and in random internet cafés in airports and resorts. It consists of four HTML tables of links which act as a jump-station for the few dozen URLs I use reg'lar. Bookmarks, if you will, but not locked to particular computers - an early example of synchronized cloud-computing indeed:

I created a memorable shortcut with url.ie and it served me well for a decade. Especially in The Before Times when I was more likely to be on a strange computer. The whole thing was about 500 characters and not more than 1kB of bandwidth. Yes One kilobyte! about 1/1000th the size of that crap photo of your boots which you uploaded to the cloud last weekend. 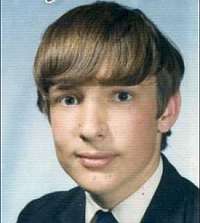 But retro is an offense to Tech Bros and since 2017, I think, I've been encouraged to port my page to New Sites . . . just click here. Well, I've tried that a few times over that time and the result is a mangled mess. Now we are being threatened with a Hard Deadline of 1st September to archive any useful information because that's when the plug is going to be pulled.  It turns out the New Sites doesn't support <table>s: no wonder it choke on my page. I could start over, but bugger Google . . . and their New Sites is full of blousy templates, heavy on the graphics, over specifying the layout. The very antithesis of the spare, economical HTML of 1990 Tim Berners-Lee [R].

So I had a very frustrating afternoon and evening last week selling my soul to Wordpress, which does support <table>s. Frustrating because, although they offer free web-hosting, the set-up process is insidiously trying to make punters pay - a little, at first - for the service. Which is fair enough, I guess. But with my roaming days over, the need for a personal jump-station is worth rather less than $3.95/mo. Insidious because the free option is at the bottom of the page in tiny print using the Shame font.

It is, of course not the only Internet operator which is trying to monetize the clicks, and this exercise has forced me to confront the fact that there are dozens of sites which I used to restlessly surf for Blog-copy in 2014 which I now never visit because of paywalls and other limits. Even if I'm allowed 3 free visits a month, I'm not going there because I instinctively hold those visits in reserve for something that matters . . . and that something never comes. I have optimistically retained all the travel-links on the new, trim,  2021 Jump-station: 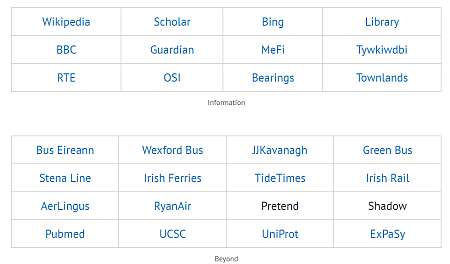 Okay then, because yo bin good: Jump around jump around