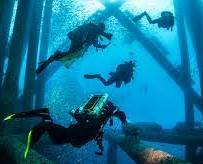 Many children entertain fantasies that their Real Parents, who are [obvs] rajas or princesses, will come to rescue them from the drudgery of homework and chores and whisk them off to a life of peeled grapes and endless access to video games. The Boy, with rather more imagination, stoutly maintained that his RPs were a) a nun on Bangkok b) a deep-sea diver on the North Sea oil-rigs. [what sat diving entails: not for claustrophobics!] At that time, deep-sea diving had the second highest rate of occupational fatality after road-repairers; couple that with nun bang kok and . . .  come up with Prince Oedipus if you want.

We were living in Newcastle upon Tyne at the time which faces the roiling grey North Sea where the wild oil rigs are. The actual business of the rigs was mostly working out of Aberdeen, a good bit greyer and further North than Geordieland. Nevertheless the oil rigs were in the air as places of dirt, hard-work, physical courage and bonanza pay packets. We moved back to Ireland several years before The Boy might have been tempted to run away to Aberdeen to apprentice himself to his RealDad. He got to work in the airline industry for ten years after he left home, which was hard enough work but cleaner and safer than deep-sea diving. He's a railway engineer now.

We were talking about the MV Ever Given, borked in Suez. He brought my attention to Oil Rigs at the end of their useful life: 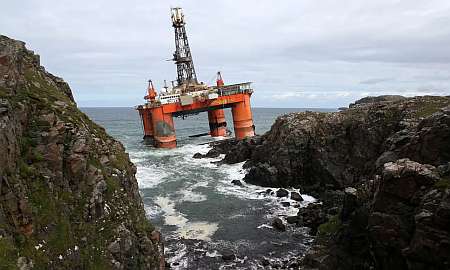 Such as the long drawn out saga of the end of Transocean Winner, which was constructed in 1983 as the Treasure Saga . It looks like an oil-rig but it's actually a ship with propellers and rudders than lumber across the ocean under its own steam. It's designed to prospect for oil and gas. If the water is shallow enough, these semi-submersibles are replaced by leg-fix platform but in deep water the rig can be held in position [forward/back; left/right; up/down] as it does its work. Given the weather and tides, that is an amazingly optimistic aspiration; which has been vindicated by decades of dividends to share-holders.
In 2016, after 40+ years of service, in a bit of a trough for oil prices, Transocean decided that the Winner was worth more as scrap and arranged for the hulk to be towed to Turkey for breaking up. The ocean-going tug and the Winner parted <baddoooinng> company at night in a bit of a gale off the coast of Lewis and the Winner grounded on a headland near Dalmore Bay the following morning. It was eventually salvaged, patched up and delivered to the ship-breakers in Turkey.  Longform at Grauniad - exec summ at BBC: which has an amazing picture of the drop-and-scoop submersible salvage ship Hawk.
As mentioned in February, another take for disposal of oil-rig was to leave the stumps in place to serve as an artificial reef. This saves Big Oil a bunch on the clean up costs and provides a refuge for certain classes of wild-life. What could possibly go wrong?
Posted by BobTheScientist at 07:35