I R retire; I get the pension; I lack for nothing; Cabbage n Spuds is cheap. Accordingly, I have a farthing or two or three. Indeed, I have the €5.00 which it cost me in petrol to jaunt to the next county for to get vaccinated. As I live a very sheltered life up a lane in the middle of Ballyganáit, the spree passed for a Dargle edutainment, if not exactly excitement: the kind of thing we used to spend €5 for in the cinema. Yes, it is a long time since I was at the movies.

Obedient to the laws, I arrived at the Cillin Covid-19 Centre carpark at 1505 for a 1510 appointment.

I was asked four (4) times by four (4) separate stewards for the time of my appointment. There was not quite enough room in the short external marquee corridor for everyone with the same appointment time. When I got to the head of that line, I was sent down the hallway to reception desk.

(5) I confirmed my name to a scribe behind the perspex, and had it highlighted off a printed list: I was expected! He sent me onto a shorter line where

(7) I was again name-checked and asked a catechism of questions all expecting the answer no: had I been recently vaccinated; had I recently copped a 'Rona; had I ever experienced anaphylaxis from any vaccination; had I been through a stroke; are you or have you ever been a member of the anti-vaxx party [kidding].

Then through to a long snaking line [so long and so reminiscent of the Before Times that I started to remove my belt, shoes and change-purse] where I spent 12 minutes in a block of 20 people indoors. That's perilously close to the >15 minutes and <2m which government messaging for the last 15 months means certain death. 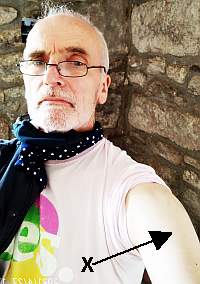 8) Eventually I was fetched to one of ten cubicles by John the Doctor who asked me for my mobile# and dob . . . but only to confirm my name. He then asked a subset of the same medical history questions as I'd answered for my earlier catechism. Maybe they are checking for short-term memory loss. After a bit of phatic blather, I exposed my left shoulder [note to 14-week future-self: wear the pink Yes t-shirt rather than your patriarchal 3-piece suit. The prick when it finally came [me looking la la la can't hear you in the opposite direction] was far less intrusive than I've had from my dentist or phlebotomist.

Afterwards I was invited to take a widely spaced chair in the other half of the hangar and told to stay there 15 minutes [honour system] and leave when that was up.

The whole show took 50 minutes - bring a book? You're not allowed to take photos [I guess for GDPR rather than to protect the security] so I had to do the selfie [R] when I got home.