I was writing the piece about my father's disappointing departure gift and the word for the board on which artists mix paints escaped me.  The Beloved was at the same table and on enquiry delivered palette. Which is, of course, correct but 'easel' was still nagging at my 'brain'.
"I wonder is easel is related to ezel [NL] a donkey?", I mused
"That's nonsense", she replied "although the Irish is asal"
"But we have saw-horse, another support mechanism".

Turns out [Chambers 20thC] I was right. Sometimes English uses horse - saw-horse, clothes-horse - sometimes donkey. We don't use ass, which is cleared rooted with asal ezel, much nowadays: probably because if offended prudish late-Victorians. Irish seems, boringly to use binse [bench] for saw-horse. Netherlanders use a zaagbok, usage which I think they share with American saw-buck. 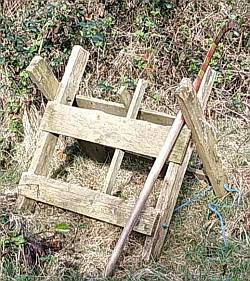 Get on with it Bob! What about these left-handed saw-horses; is that even a thing? Indeed it is, as I recently discovered in a typically Bob what could possibly go wrong project. I am the bloke who installed a run of sheep-wire upside down so that lambs could escape through the big holes. There are only four possible ways you can arrange the reverse sheet if you want to xerox something back-to-back . . . I would always take at least 5 attempts to get it right. When we rocked up to the farm 25 years ago, I brought a car full of dismembered pallets and crates: every time a centrifuge or -80°C freezer was delivered at work, the chief technician would tell me there was more wood by the big dumpster. A 40ft x 4ft euro-pallet is almost a perfect kit for making a saw-horse and the farm had a lot of fallen timber for fire-wood. I made a saw-horse [still standing, albeit with a list to port L] and a while later made another for Pat the Salt my then not so aged father-in-law. They have both been well-used and are shorter now than when made as continuous contact with wet-ground has rotted out the legs. 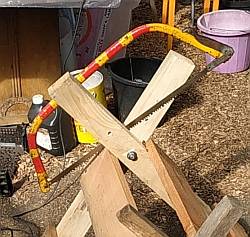 The time had come to make another, not least because it would be unseemly for my three adult children to have to fight over who was to inherit two saw-horses. The pallet wood is long used, re-used, re-used and sent up the chimney. I took delivery of a dozen each of 2x4s and 2x3s before the pandemic drove the price of lumber to astronomical levels. I chose the ropiest, shookest, knottiest 2x3 and cut 4 lengths to 90cm for the cross and, for the horizontals, 4 same-length off-cuts of western red cedar planks from the Young Bolivar woodshed project of 2016. Cut cut cut; drill drill drill; screw screw scree, bish bash bosh . . . et voilá chevalet! [L]. Except that, if you're sawing as close to the horse as you can (as you do) you are almost certain to tonk your fist, thumb or knuckles on the corner of the 2x3 which is pointing directly at your shoulder. Yarooo! The irony is that, with my head, I'd acknowledged this problem and carefully thought about it as I was drilling the counter-sunk bolt-hole . . . and still managed to get it wrong. 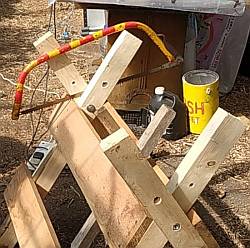 Part of me was preparing to say meh! and put it down to experience and move on. My poor knuckles argued vehemently against this lazy-arsed option and after a night's toss-turn-thinking, I tooled up again and disassembled one end of the saw-horse. It took me two attempts to re-assemble it as [R] so that the 2x3 nearest the work is further from and facing away from the working fist and so much safer. If you look carefully, you can see bolt holes 10cm further from the ground. These were drilled when I thought I was a much bigger man than I really am and resulted in a Brobdingnagian saw-hippo than was really uncomfortable and inefficient to use. Wot a palaver, mates. Bodging is good fun but it consumes hours of time. Lucky I have nothing better to do.
Posted by BobTheScientist at 07:53