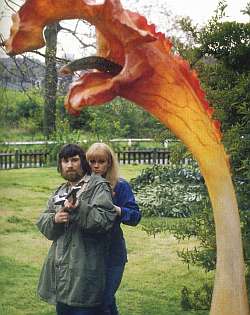 I've been promising, but I finally settled in to re-read John  Wyndham's The Day of the Triffids [exec summ plot] after a gap of at least 50 years. I borrowed the copy in Dau.I's bedroom here and it had my Da's name in the front, so I felt generationally duveted. When I read Triffids at the age of 12, I was delighted with the idea of free-stuff [beans, ammo, DIY books] in a post-apocalyptic world. I still get a frisson about that now but the book is more interesting / challenging in its address of "what to do when The System is overwhelmed with deeply damaged people who cannot survive w/o help". It is therefore resonant as the indignant cries of triage ring out from outside the ICU in Bergamo and echo the chamber of health policy people in Ireland and round the World.

Triffids is not toooo much of a polemic; it's a story that came out of the Cold War (publ 1951 and blaming the Russians for starting the crisis) that imagines the future in a world turned upside down. Although the issue, 70 years ago, was nowhere near as urgent as now; one sub-text in Triffids is that humanity has been a devastating stressor on the natural world and the author takes a certain grim pleasure in describing the return of the native in and over the built environment. Houses turn to seed-beds if you won't clear the gutters, lads!  But it's not without hope in painting an expectation that, if needs must, you can overcome ignorance and make some sort of a fist of shifting for yourself. "Looking back at the shape of things then, the amount we did not know and did not care to know about our daily lives is not only astonishing, but somehow a bit shocking. I knew practically nothing, for instance, of such ordinary things as how food reached me, where fresh water came from, how the clothes I wore were woven and made, how the drainage of cities kept them healthy".
Two years later, following the Precepts of Heinlein, the Triffid survivalists are "able to change a diaper, plan an invasion, butcher a hog, conn a ship, design a building, write a sonnet, balance accounts, build a wall, set a bone, comfort the dying, take orders, give orders, cooperate, act alone, solve equations, analyze a new problem, pitch manure, program a computer, cook a tasty meal, fight efficiently, and they have seen very many people  die gallantly".  The casualness with which people get offed, often by triffids but also by people [including the narrator] and accidents [so easy when you're struck blind], is a deck-clearing signature of the first part of the book. It's as bad as The Towering Inferno, where extras are shovelled out of the burning building to fall on the pavements like rain. So to the nearest whole %, <spoiler> everybody dies </spoiler> . . . who gets saved is largely accidental.

There are some black hats but the general tenor of the survivors is that they will do their best to help [blind] people, so long as they have agency in the choice of whom to save. They bridle if compelled to be the 👁👁 of a group of randomers but will pitch in to help if asked nicely . . . and the ratios are not clearly unsustainable. Robert Sapolsky's treatise on human psychology Behave, has a central chunk on Them and Us and how our hormones and neurotransmitters make us define and then react to these two classes of people. Most people are kinder to their own dog than any person outside the immediately household. As a naive utilitarian with blunted affect, I am on the same page as Wyndham: if you try to save everyone then everyone dies. But no person, no too-small group, can survive alone in a hostile world: if you share the Brexit Bunker flour with (or make scones for) the neighbours then reciprocity kicks in and everyone does better, through trade.

Dau.I shared the dilemma of Josiah Hawthorn a prepper who had amassed a sufficient store of flour and beans [and toilet paper, I guess] against Armageddon. When Hurricane Sandy slapped in and inundated New York and the Jersey Shore, Mrs Hawthorn just broke open the bunker and started cooking for folks who had been flooded out . . . and Josiah delivered it; having been shown how to be a Mensch. "What would I do with the money? Eat more??" Aaron Feuerstein. 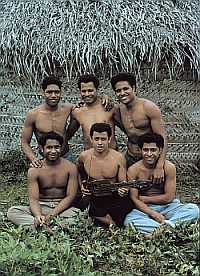 Three years after The Day of the Triffids, William Golding, another member of the British patriarchy, published Lord of the Flies which offers a very bleak assessment of the capacity for kindness and kinship among a group of British proto-patriarchs boys. Poor Golding had been an oppressed schoolboy and later a teacher of schoolboys and had seen so many examples of casual cruelty that he took the law of the jungle to be embedded in the human condition. Rutger Bregman's [prev] antidote [Lord of the Lifes?] has been widely circulated this last week. By cooperation and kindness, including set a bone! six teenagers survived / thrived for 15 months in an actual jungle on an uninhabited tropical island. Extrapolation and commentary on MeFi.

And triage? Deciding who gets saved? We do that all the time with our tax-dollars, through our elected reps. By separating Health and Welfare into separate domains run by different ministers fighting for a bigger share of the tax-pot, we allow all kinds of "extras" to fall between the cracks. You're better served for prostate cancer than for suicidal ideation. We approve enormous amounts on quite rare conditions like haemophilia, Down's Syndrome and cystic fibrosis. Much less on boring background stuff like  urinary incontinence, alcoholism, mental health and sex education.
Posted by BobTheScientist at 07:44