In the mid-90s of the last century Anu Garg was a MSc computer science student in Ohio. While still student, because he had the technical capacity and the interest, he started wordsmith.org to deliver A Word A Day AWAD to interested subscribers. As an early adopter of the WWW and e-mail for communication outside of academia he got there firstest with the mostest and now runs Wordsmith and AWAD full time. There are ~ half a million subscribers to AWAD, including me, and this addition to my inbox has generated a few Blobs. That's a lot of outgoing e-mail traffic and there's a lot of incommming as well: some quite shirty and cross. On dit que Mr Garg is a OneMillionaire and his venture employs 4 people. I wish him well even when he is occasionally wrong . . . 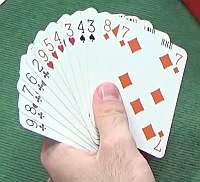 Take AWAD 7th April 2021. Yarborough n.  In a card game, a weak hand, especially one in which no card is above a nine . . . the occurrence of such a hand [see R]. The actual odds are 1827 to 1. But those odds, that probability, is only true if a card game is Contract Bridge or Whist where a hand is 13 cards. Which was an opening for Clever Clogs to reply It's clear nobody Chez Garg plays cards [and more power to them all!]. The odds mentioned apply to a 13 card Bridge hand. A Yarborough Poker hand [8%; 12 to 1]  is a regular occurrence ; and a Yarborough Blackjack hand [37%; 2 to 1] happens pretty much every deal. It's unlikely Yarborough played Contract Bridge which didn't become trendy until after his death; more of a whist man.
Someone was clearly burning the midnight oil at AWAD head office in Seattle because ek dum I got back: "For the rest of us, you'll have to include what those percentages mean, what "12 to 1" and "2 to 1" mean, and how many cards each hand has in poker, bridge, etc. Thank you." 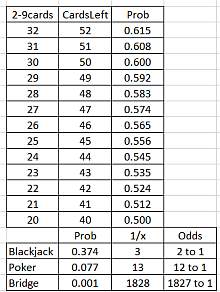