Shill is for shillings

Álvar Núñez Cabeza de Vaca was born in 1490 in Jerez de la Frontera, where the sherry comes from. Jerez is now a suburb of Greater Cadiz and about halfway between Gibraltar and Portugal so de la Frontera may read peculiar to modern travellers, not least because there are dozens of towns and villages with the of the frontier suffix.  Cabeza de Vaca [= cow's head, great name] lived in exciting times. Before he went to school

Young Álvar was connected and secured a paid position on a 1526 expedition to explore "La Florida" and points West on the North American mainland. It was pretty much a disaster: storms, disease and confrontation took toll on the band, but Cabeza de Vaca and his diminishing party inched along the coast to Galveston Island where they lost the last of their makeshift vessels. The restless conquistador set off into the interior with three companions; trekked through unexplored regions of Northern Mexico as far as the Pacific and rocked up the Mexico City in 1537. From the 600 who left Spain, only 4 returned which is a 99% attrition rate like that of the Georgia Flu. Cabeza de Vaca wrote it all up in a best-selling Relación. I mention the fictional pandemic because many of the tribes and people described in the Relación had disappeared completely when organised Spain formally conquisadored the region . . . quite possibly decimated by novel viruses caught from the Europeans. 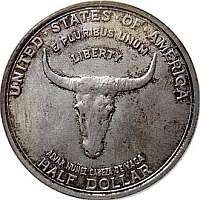 Fast forward four hundred to 1935. In that year the US Mint in Philadelphia struck 10,000 commemorative half-dollars [obverse L]  to recognise the depredations of Cabeza de Vaca. Commemorative coins were effectively a licence to print money on behalf of speculators. This one was designed and distributed by a numismatist from El Paso TX called L.W. Hoffecker. The coins were struck at government expense and sold to appropriate parties at face value for distribution. Hoffecker was determined to get his snout in this pork-barrel, first with a 75th anniversary issue for The Gadsden Purchase in 1929 [passed Congress, vetoed by President Hoover]. He made a trip to Washington in 1935 to shill on behalf of the El Paso Museum Coin Committee for a commemoration of The Old Spanish Trail - a cowboy romantic cattle drovers road of yesteryear. According to his letters, five minutes with President Franklin Roosevelt was key to the success of the venture. 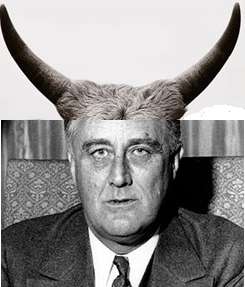 The coins were duly struck, Hoffecker paid $5,000 and took delivery of a sturdy chest full of coins. Half dollars weigh 11.34g so the chest tared in at 1 cwt = 55kg more or less. Hoffecker then proceeded to sell these coins "on behalf of the Museum" at rather more than face value to his numismatic friends; who sold them on to lesser punters everyone taking a small cut. The El Paso Museum were given a pair for their collection. Utterly corrupt wheeling and dealing of this nature was much admired by his fellow coin-dealers and he became President of the ANA American Numismatic Association. The President of the United States of America had been used by private enterprise to further its own interests. What does The Blob know about FDR? . . . and the Polio. And a long list of lovers as well as his wife Eleanor: Missy LeHand, Daisy Suckley, Lucy Mercer, at least. Although the cuckold's horns are traditionally given to a man whose wife has been bonked by another . . . the Cabeza de Vaca connexion is too good an opportunity to use them here to recognise another form of shafting.
Posted by BobTheScientist at 07:49