I can so read! I learned at about the age of 8. For the next ten years I read A Lot: St  Augustine, HE Bates, Ag Christie, Ch Dickens,  TS Eliot . . . WB Yeats, Em Zola. Then, in short order a) I left home  b) met The Beloved c) got real d) was learning how to Dad. I won't say I stopped reading, but I found that there were other ways of acquiring information and ways-of-seeing. Now, 45 years later, I R retire and I am finding more time to read and "read" [audiobooks]. Dau.I the Librarian has been amazing for half-inching books off the selves at work and sending them down country to her locked <hic> parents. Good choices: maybe not what I would have picked; but all the more interesting / challenging for that.

We have A Lot of books on out own shelves, of course, but I haven't yet been tempted / driven to re-read any of  them. Certain others of my family are happy to re-read green Penguins of which we have dozens, as memory of whodunnit fades with age, these mysteries recover their purpose. I wasn't explicitly casting about for something to read but, despite it being fiction, The Beloved added The Illusion of Separateness by Simon Van Booy to my reading stack and I read it through, more or less in one sitting. "despite it being fiction" sounds super-pretentious but I do recognise that literature can a) be diverting b) offer clues to how best to be human and alive. Science is no help at all for the latter!

It is hard to work out where the centre of the story is. The acknowledgments flag that the story of John and Harriet Bray is inspired, in part, by the real life story of Bert and Annette Knapp. But that straightforward tale is too slight to fill a book that will secure a publisher's advance. John/Bert married in America and shipped to Europe and was shot down over Nazi-occupied France. Both survived the war. While in France, John has a p2p encounter with a poetic German soldier. But he also met dozens or hundreds of other people in England and France whose lives intersected his and then lanced away on their own separate trajectory. The key meeting between soldier and airman is deliberately obfuscated by an authorial trick of writing the chapters out of chronological sequence. Flash-back, flash-forward is a thing that writers do for . . . reasons. But Van Booy is sufficiently uncertain of his ability to convince the reader where-in-heck they are and who is Dave? that he flags each chapter with a place and date stamp: 2010 - 1981 - 1968 - 1942 - 2005 - 1944 - 1939 - 2010 - 1944 - 2009 - 2010 - 1944 - 2010 - 1944. It keeps circling back to 1944.

If there is anything to be learned from this fragged tale it might be that good deeds are rewarded, not in a paying forward sort of way, but by direct reciprocation even if the pay-back may take some time. This appears to echo one scientific theory - reciprocal altruism - for why people are nice to strangers or people who are not genetically related. It is an edge case for the idea of The Selfish Gene. That's pretty sad as an indicator for how to live your life: only be nice if you're confident of pay-back. It is vanishingly unlikely that you will both read this book and read this Blob but I have mapped out the relationships for me: 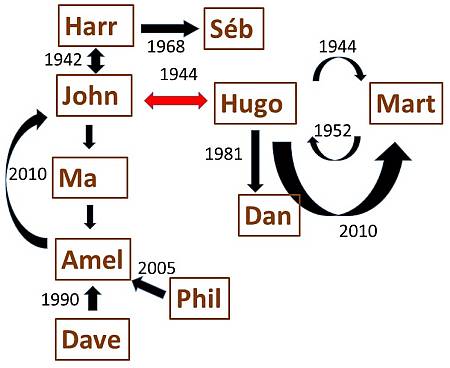