Dau.I the Librarian Many Talented has been down for essential agri-business on the farrrm: to wit the 2o2i lambing season. We haven't been lambing these last few years because The Farmer has been double-jobbing as The Carer and could no-way guarantee she would be present 24/14 for peak delivery time. That was The Plan this year also; but then several of the ewes entertained a roving ram [or two] and it was clear, from their filling ''elders" that they were expecting. 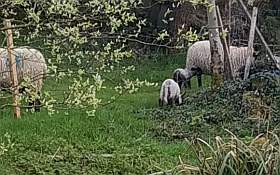 Two dropped their lambs [L with quince tree] in the week after Easter; coincident with the arrival <tan-ta-raaa> of the Dau.I sheep cavalry. The Library will have to manage without her for a long week, which will free up The Beloved for her many other duties. Me? my hands are too big. Quite apart from the utility of having an extra pair of [small] hands, it has been wonderful to have a different perspective and a different way of doing things. Not toooo different: she grew up here, after all.

It turned out that she had sent her nieces in England some chocolate Easter eggs, which <Brexit> arrived late. On the family zoom last Sunday she asked if they had finished their scoff and there was a somewhat garbled story that some of the goodies had been consumed by their father to protect their teeth. The Boy, their father, is known to have a bit of a sweet tooth so this grass 'im up tale had the ring of possibility. In 2017, when I went to England for two weeks after my mother had her cataracts scraped. I was only required to administer eye drops 4x a day, so I had time for other things including a deep-clean of the kitchen cupboards. When my nursey duties were over I drove 2 hours N to hang out with The Boy before catching the ferry home.

I told him that I had brought away some packets of dinky Green&Black chocolate bars [as R] of indeterminate age. We opened the first packet to see if they were edible. All the wee bars had developed a white  bloom  [technical term] where the sugar had dissolved from the choc-emulsion on prolonged contact with moist air. This isn't fungus and the little bars were certainly edible - as we proceeded to prove by eating them. The youngest pack was 2 years beyond its sell-by date. Needless to say we experienced no adverse effect from consuming these pensioned candy-bars. Sell-by is indicative rather than proscriptive.
Posted by BobTheScientist at 07:13