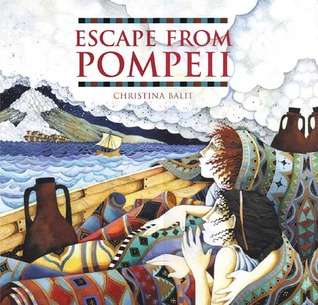 I have cultivated a business relationship with a bookseller in the village next door to where Gdau.I and Gdau.II [and their parents] live. So far I have only used it to KrisKingle a present to their mother. But the kids are relentless consumers of information about the things - unicorns owls Greeks hieroglyphs - which interest them. Dinosaurs are not getting much traction. I've now put out a call for anything by Roger Lancelyn Green whose mythologica, especially those booked illustrated by Janet and Anne Grahame Johnstone, entranced me when I was their age. Those creatives are all long dead and their books out of print although they circulate 2nd hand. As a stop gap I've just ordered Escape from Pompeii by Christina Balit.

But having that book delivered to the door [a service offered by Beaufort Books] would be just another parcel in a steady stream which turn up at their house containing food, books, tools, wool, boots. Accordingly I sent them six tetradrachms and said these coins could be exchanged for something at Beaufort Books. The security password was to be [obvs] "Athene noctua" the little owl which is represented on Athenian tetradrachms and the modern Greek €1 coin. Make t'buggers work for their education.