Taking one for the team

For a few years in the 00s, I worked in SVUH St Vincent's University Hospital in their research wing. I met a lot of Junior Doctors on that corridor as they cobbled together some original research towards an MD or a BCh on top of their 6 year medical degree. getting some paper quals was vital to progression up the relentlessly steep professional ladder to the distant clouds of a Consultancy and a well deserved round of golf on Wednesday afternoons. Those young people worked so hard in circumstances which would have most of us reaching for a bucket to lose our lunch. About 25% of the entire national budget goes to "Health" and those doctors, and their along-side nursing colleagues, must have looked at their pay packet and wondered where all that money went. It's no wonder that doctors and nurses marry one another: people working 9-5 M-F find that dating medicos is hard work: so many broken promises and missed dates and cancelled weekends away - all in the exigencies of the service. 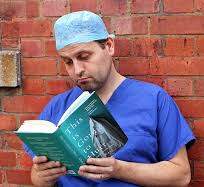 This flushing your social life down the t'ilet is brought front-and-centre in Adam Kay's This is Going to Hurt [R]; his retrospective of 6 years working the Ob & Gyn departments of several English hospitals in the 00s. That book is mostly wincingly hilarious: if you work for years doing far too many overtime hours you build up a lot of experience so there's plenty of copy if you keep a diary and have a dark sense of humour.

One example: after several times having to stand up his mother, he finally clears the decks to meet her for dinner immediately after his shift on the ward. After the starter, his mum settles into full Jewish Mother mode, licks her fingers, plucks a spot of spatter from Adam's face, pops it in her mouth and licks her fingers again. It all happens so quickly that it's too late for him to twig that the dark gobbet on his cheek came from work rather than the soup.

Through the wonders of Borrowbox, I had the luxury of having Adam Kay read the book to me rather than me having to make the effort of turning the pages. It's distracting and engaging and it has encouraged me through several hours of routine tasks like cleaning drains, chopping wood and washing dishes. But in among the larfs, the strain on his relationship with his partner is a sustaining narrative thread. That and the systemic, institutionalised, carelessness about the human resources which hold the health care system together. The requirements of the service involve extra work and erratic shift scheduling which routinely cancel dates, birthdays, weddings, funerals, let alone getting the car serviced, a decent home-cooked meal down or good night's sleep. You'd really think that it would be sensible to manage the HR assets better. The schedule goes pear-shaped when one of the effectives falls asleep at the wheel after a 13 hr shift. Quite apart from the damage done to mothers and babies when exhausted doctors are making life-and-death decisions at the end of a busy shift.

The commodification of health care dictates that there is no slack, no back-up in the system, no spare capacity beds, no grief counselling, no PTSD therapy. Doctors I know are, by definition, resourceful: only a subset of conditions fall within the neat chapters of medical text-books, they learn on the job and the best of them are decision-makers. They cannot stand aside and let things unfold but are impelled to act. Then they have to settle their conscience afterwards . . . without any formal help.

In the end [of the book] Adam Kay jacked in his scrubs. He had one terrible case too many, on Th 2nd December 2010 a routine caesarean turns nightmare with an undiagnosed placenta previa. The baby is stillborn, the mother loses horrendous quantities of blood that can only be staunched with a hysterectomy. While the mother is wheeled off to ICU between life and death, Adam goes to write up his clinical notes but can do nothing but weep hot bitter tears for an hour. He knows he did the best he can; that nobody in his position could have done better; that shit happens. But he's done; he's given medicine the best years of his life, he's given it socks, he's been brave and cheerful and supportive of his colleagues but someone's life has been ruined on his watch . . . and he's had enough.

Luckily, he didn't top himself. Luckily, he's got other talents. After several years coming to terms with his defeat, he could bear to look again at his journal and he wrote up his story in the book. It ends with an open letter to the Minister of Health; suggesting that the way the system treats front line staff in his empire is not only scandalous but self-defeating. The book was published in 2017, was favourably reviewed and sold a million copies. Nothing has changed! At the beginning of the pandemic these already working-at-max healthcare workers found quite unexpected inner resources in the crisis. The government's response? Let's encourage people to give a round of applause and/or deliver pizza and chicken korma to hospitals. Shame!