As a tree-hugger, one of my besties is the mighty ash Fraxinus excelsior at the bottom of our yard. This tree is directly downslope from our front door and has been occluding the sky and shading the yard, in Summer, since we moved here 25 years ago. It was obviously smaller back then, but it was still a tree [self-seeded and growing from the top of a stone bank] rather than a sapling. But squinting through one eye and marking lines on the kitchen window, I calculate that the tree is 8½ times taller than the shed beside it or about 28m high. I am very glad that ash has but little tendency to uproot itself because 28m is 4m more than the distance from the tree base to the front door. 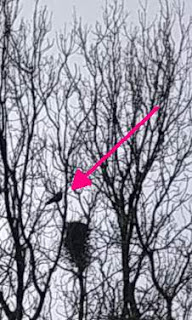 This Spring, the ash has finally been adorned with a crown of twigs, courtesy of a crows' nest [L with Le Patron pointed out for scale] started by a pair of rooks Corvus frugilegus. The Beloved's theory is that until now the tree hasn't been tall enough for the rooks to feel safe enough to build a nest - it is at least 25m above the ground. I hope it works out for them . . . then again, maybe I don't: crows are big and noisy and they bully the smaller, prettier, quieter birds away from the tray of bread-crumbs which I put out most mornings after breakfast. The Beloved has had to park her car in a different place to stop it getting spackled with bird-shit. But on the silver-lining front, she was able to pick up a large basket of kindling from the ground immediately under the nest. Very rough estimate suggests that only a quarter or a third of the twigs brought to the nest-site actually get incorporated into the structure - and we've really not had any gales since the nest project started.
Posted by BobTheScientist at 07:18