How the other half

I've cited Steven "Curse of Knowledge" Pinker many times over the last 5 years but not mentioned his book The Blank Slate about the relative impact of nature (genetics) vs nurture (upbringing). The first sentence of the preface reads "Not another book on nature and nurture! Are there really people out there who still believe that the mind is a blank slate? Isn't it obvious to anyone with more than one child, to anyone who has been in a heterosexual relationship, or to anyone who has noticed that children learn language but house pets don't, that people are born with certain talents and temperaments? Haven't we all moved beyond the simplistic dichotomy between heredity and environment and realized that all behavior comes out of an interaction between the two?”

. . . my brother and I have half our genes in common, we went to the same schools, albeit 3 years apart and we both have three children. But despite these constraints (and being SWM beyond middle-aged, of course) we are very different creatures. My mother summed it up a while back in the context of shirts. When our Dad died in 2001, I snagged all the oul'fella's office shirts . . . and his best pair of black shoes. I wore those shirts at work until The Beloved ripped them off me back and reduced them to kitchen rags. The Brother otoh wears one shirt, throws it on a growing heap near the laundry room and buys more shirts when there are no clean ones left in the press. I'm still using The Da's shoes because I keep them for weddings, funerals and interviews which are thankfully rare events in my life. The wider run of my family (including in-laws, out-laws, nieces and neffies) split about 50:50 on the thrift v spend-thrift axis. 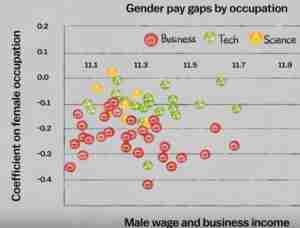 I've been bumbling along just above the base-line for salaries in science for nearly 40 years and science is notorious among the professions for being poorly paid [R all the yellow dots to the left side of the graph], so I couldn't have gone all flaithulach about money without selling one of the kids. The Brother otoh was one of the most successful people in British wireless and TV entertainment through the 1980s and then worked in the advertising industry, which can both be a bit boom-and-bust but the boom years can be spectacularly boomy. At one time, he was instructed by his accountant to buy a piano - Steinway for preference - to offset that allowable expense against the tax bill. I'm not completely sure but think that our two careers were tailored to the character rather than the other way about.

I've written before about Dau.II who is currently "resting" - as actors have it - between jobs because she saved enough over the previous four years of hard-graft in the catering trade to take a sabbatical. The way she phrased it " what more could I want, I have four sorts of cheese in the fridge". When she got a pay-hike, there were five sorts of cheese available for breakfast . . . and not a whiff of a foreign holiday, or payments on a car, or down-payments on a house. Looking at her peers, she explains her positive finances by noting that neither she nor Her Feller dhrink. But it must be more than that and she a notoriously light packer when travelling. If you only have two pairs of shoes, you don't need checked baggage. Dau.I otoh seems to be skint a lot of the time, not least because she will buy books, new books, of which we are storing a library-full in her bedroom at home. She went to England aged 17¾ with two suitcases and came back 4 years later with 2 tonnes of stuff - mostly books. Oddly, although I'm now a two sorts of cheese chap now, when I had no money as a student I was often to be found buying books, new books. The accumulated collection of which I guess helped the girls kick-start their own reading habits.

Now although this is all very personal, it's of limited interest because the range options and choice described above is quite limited - genetically at least. I'm on this jag at all at all because I was browsing the blogosphere and was directed to a number of comparative weekly spend-diaries for 'Millennials" - all women I think. It's quite compelling in a voyeuristic way to see how the other half gets through their pay-cheque each week, whether they are in Lisboa or NYC, and earning $40K or $160K. Because it's about Millennials, a lot of the discourse consists of cheap shots against avocado toast. Which is really quite yesterday at this stage and not worth flogging with the whip of judgement. While you're about it (if indeed you've read this far) you might check out this thoughtful deconstruction of the gender pay gap from Vox. The pay-rate graphic above is lifted from the Vox vid. Short answer: be sure to compare like with like.

Finally, I'll point out that, over the last 40 earning years, whether we had a month of dining out and weekends away OR a month of eating nothing but Caldo verde, my pay-cheque disappeared just the same. When UK academics got a 25% pay hike in the mid 1980s, I promptly went out and bought some Japanese consumer electronics and then settled down to getting through my augmented salary without being able to point to aNNything which had 25%-improved the quality of our lives - apart from the Technics HiFi: that was mildly entertaining in a vinyl sort of way. It has been my sneaking suspicion that if I'd lived higher on the hob all those thrifty years, I'd be exactly where I am now but having had more fun. No moaning, mind - cue La Môme.
Posted by BobTheScientist at 07:40