Space below my feet 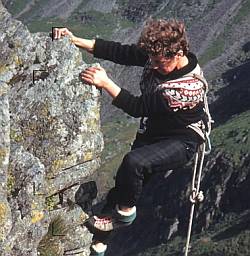 Just before Christmas, I flagged a short biographical film about Gwen Moffat, a pioneering rock-and-ice climber of the post-WWII years. A couple of days later, The Beloved was in the local Post Office which as a side-line runs a micro lending [take one put one] library. She picked up a copy of Moffat's autobiography Space Below My Feet published by Penguin [90p] in 1976. It actually cost Garry Styles, Galway 1978 99p because back then Ireland charged VAT on books but the Brits didn't. Someone later had paid £2.50 and the first 100+ pages have fed a family of book worms. And now I have, for €0, the book for a while. It's an interesting read; a lot more interesting to people who do actually rope up and climb rocks. A lot of names are dropped in the first part of the book when Gwen is out there meeting the best young climbers of her generation.

One of the nothing to see here themes is the frequency with which these mostly young, mostly men drop out of the story . . . from a great height. It's like the Towering Inferno [prev] where the director shovels the extras out of the building to indicate that the stars are really up against it. I have to admire the dedication and question the sanity of people who put themselves literally in the teetering edge at every opportunity.  What is also remarkable is how unjudgmental are the mountain rescue people who go out - usually when / because conditions have turned really bad - to find the benighted . . . or pick up the pieces. It's like the lifeboats; those who get rescued have made a mistake or had tough luck; the rescuers have been there themselves because the sea and the mountains can both rapidly changer to danger and are unforgiving when a crap hand is dealt.

Nevertheless, I think its important that, when they are young and supple, youngsters should go outside and put themselves up against it. In a medium that has real consequences and real dependencies on the actions and reactions of others. Grand Theft Auto VII and Assassins Creed III may tune up your sympathetic nervous system and hone your reflexes but without any consonant muscle activity [thumbs excluded] you may jangle the co-ordinated mechanisms for maintaining physiological homeostasis. Don't do this at home, lads: do it on the fells.

There is a glossary, it is evocative: