Too lazy to split

As I mentioned last year, the summer England won the World Cup (July 1966) I was living in Haslemere and had just turned 12. My father was a year from retirement from the navy and had yet to buy a house, so we were renting a 4 bedroom Edwardian mini-mansion with gardens back and front and a shed right at the bottom of the property where the shade of trees from the neighbouring woodlot made a lawn impractical. The rental agreement included a wide variety of garden tools including a handy axe with enough weight to split logs, so long as they weren't too knotty. I loved that axe. There was a large pile of damp lumber between shed and fence and I worked my way through it, getting more like Charles Bronson . . . a zen master with each outdoors day. With each passing week that summer, the lumps of wood got smaller and smaller until they was not so much kindling as toothpicks. Not much use for the purely ceremonial fire-place in the living room: a load of such wood disappeared up the chimney with an explosive >whoof< which left the room cold. Like the farmhouse where Dau.I and Dau.II were born 30 years later.

Not a bit like the Waterford 104 cast-iron wood-burning stove [like the one L] which is even at this moment warming the cockles of my hearth. Load up that sucker and, from a cold start, it will heat the room in about 25 minutes and need the door to be opened within the hour. It is super efficient and we have a lot of wood to service it. We've never been short of firewood on the Farrrrm because about 2000m of unmanaged hedgerow marked out the property and branches are always falling into the fields during stormy weather, While it might be neat and aesthetically pleasing to have neat stacks of split wood precisely 40cm long, it ain't gonna happen if I save pretty much every gnarly elbow and twig for fuel. And I tell ya b'ys, I'm not as fit for chopping wood as I was when I was 11. My wrists don't have their sproinnng anymore, so I'm a bit precious about protecting them from the shock of chop. Like an old fighter, I have to box clever rather than box hard.

The interior dimensions of the stove are 40 x 24 x 24 cm, but you can thread in something 10% longer if you insert it on the scow. The thing is to cut the logs less than 40cm long with the smallest amount of effort. If a branch falls out of the tree at 85cm, do you make two cuts or only one - with only 50% of the effort? I'm not great about making decisions, and when presented with such a dilemma, I often go make a cup of tea instead. When splitting logs, I just chop away; figuring that lumps smaller than maximum fit also have a place in the conflagration. But I do try to stop reverting to 1966 and generating a pile of kindling. All our kindling is ash Fraxinus excelsior twigs of which we get a bagful after every storm - the dead=dry twigs fall preferentially. 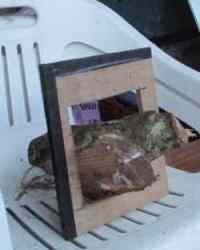 The biggest problems are knotty branch points where the wood-fibres travel every which way and it's damned difficult to split. The joy of wood-splitting is solving the puzzle of where and at what angle to >!tonk!<. Wood is best split as soon as felled, preferably in freezing weather. If you leave it a year, the logs tend to knot up as they shrink and the work is harder. I tend to throw the tricky pieces in a dry corner - after several years of microbiological action they often become splittable again. Nevertheless you don't want to carry on trying to split a gnarly lump if it will fit through the fire-door as it is. I have accordingly made an Waterford 104 orifice template [L in use] out of an offcut of plywood, which now hangs in the woodshed.  If fit = stop split.