Orange shame avoided
Thank heaven for a leap-year: without it we wouldn't have made marmalade in February, let alone in January when Christians get the task done. When my marmalade-mate 2014 - 2017 Aoife announced last year that she was completely Out of breakfast preserves, I replied tartly that my marmalade days were behind me. Why would I get washerwoman's hands and spatter-burns all up my arms to supply all my friends-and-relations and various hangers-on at work with marmalade when I could drop into Tescaldidl as necessary and buy a serviceable jar for €1.80 the pop? I demanded with bitter irony. But Aoife is nothing if not dogged and when she repeated her call to marmaladey arms <ouch>, I was prepared to say yes. Then my mother died which consumed all the January weekends and February was almost done before Aoife found a window of time to plunge into the centre of Dublin and buy the oranges from Sam Dennigan. Because it was late in the Seville Season, there were several blue furry oranges in the box, which 'Sam' helpfully swapped out from another crate, not failing to chid her <tsk tsk> for not coming in January.

On Monday night [24/02/20] when I came back from yet another trip to England, I called by Aoife's gaff to collect the oranges. The following evening I did another triage through the crate finding a couple more blue furries but several others which had been up close and personal to the write-offs but were, like the curate's egg, good in parts. When I did that Tuesday triage, I cut the oranges in half to make sure they didn't house a world of spores in a dried out husk waiting to change colour. These edge-of-sell-by items I piled into a large saucepan and cooked up sufficiently to deter further fungal invasion. I was therefore one pan ahead of the game when I sprang out of bed at 0600hrs on Leap Day. 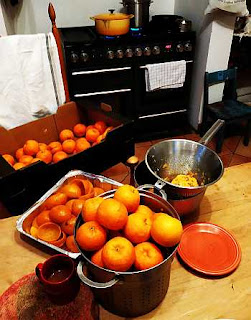 Inventory for making marmalade [R]:
The great thing about about Deli O'Smith's recipe for marmalade is that it separates in time two processes essential to the gelling of fruit preserves. First you release the gelling agent pectin from the skin, pith and pips then you add sugar [the acid is already there in citrus fruit] which binds with the pectin [and increases the viscosity with dissolved solids]. Other recipes for marmalade try to achieve these two processes in the same time frame. That, dodgy, method is much more like to result in disaster: the sugar is caramelising then blackening on the bottom of the pan before sufficient pectin is in solution for the gelling reaction.

This year, because of the triage, I twigged that cutting the fruit in half allowed a more efficient packing of the pan, so that the ratio of water to orange was more fruity. Between 0600 and 0645, therefore, I had filled our two biggest, tight-lidded, saucepans with halved, cleanish, blemish-trimmed fruit, filled the gaps with ~2.5 lt water and set them to simmer for 3 hours.

The next stage of the process, when the pulp, the sugar and the fishes of chopped peel come together in a final rolling boil, is best carried out in a wide jam-pan with sloping sides to maximise the surface area and hence the evaporation of liquid. A modest simmer won't do the trick. With all that sugar and protein, the liquid will at some stage in the process boil up [and over if the pan is too full], so it is better to split the pulp into a couple of batches and do them in sequence. Not least because if the first lot isn't setting you can add a touch more sugar (and/or a squirt of lemon juice; whose acid helps the pectin to set) the next time. In the Deli O'Smith protocol, this stage of the process takes not more than 30 minutes. You can do it by the clock or check by putting a dribble on a cold plate to see if it will set there. You have to have faith, sisters, because over-cooking will set the marmalade more chunky and less spreadable: less is more. otoh if you want a darker brew you can/shd cook it off a bit longer. Always, the last jars poured from a batch will set harder than the earlier top skims. 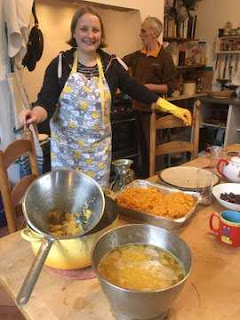 Just about the time the two 0600hrs saucepans were finishing their 3 hour simmers, the rest of the household started to wake up and demand breakfast. Dau.II, who had arrived the night before and is ever up for a colourful cook challenge, put herself on the task of scooping out the pulp, and processing the skins coarsely through a Spong hand-cranked mincer to generate the "fishes" of peel in the final product. The pectin-rich pulp was simultaneously [many hands make light work] pushed through a fine pored conical sieve.  Each panful of fruit generated about 4 pints = 20 fl.oz = 570 ml and my rule of thumb is to add 1kg of sugar per pint. That is on the low side of settability but if you add more sugar it just gets sickly sweet and the bitter grown-up bite of the Seville's gets lost in the wash.

A couple of hours and several cups of tea later, we had boiled down four or five batches of (2 pint pulp + 2kg sugar) and aliquotted them into oven-sterilised jam-jars. That would normally be a job well done and a cause for cake or at least a round of scones as a marmalade vehicle but we were still expecting Aoife's party to follow her oranges down from Dublin and get cookin'. Apart from anything else, we were running short of serviceable jam-jars. Undaunted, we filled up the two largest saucepans again with clean halved Sevilles and set them to boil. Not a moment too soon, the jam-jar cavalry arrived from the Big City and by the time we'd all finished a Leap Day lunch that couldn't be beat, we were ready to process the next batches of bubblin' Sevilles. 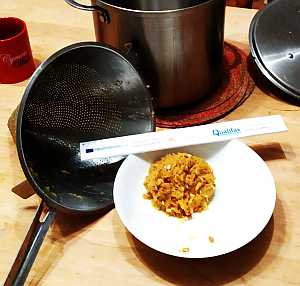 The joy of doing things again and again before you forget what happened last time is that you get to know the process. Like medieval swordsmiths who, after decades of deliberate practice, knew the temperature of the steel from its colour, so we could tell when the marmalade was ready to pour from the texture of the boil. No real need for a cold plate, let alone a jam-thermometer. The other positive outcome of repetition is that you can ring the changes - we are not machines after all. Confident that we'd mastered the basic process we made i) a small batch without fish ii) a batch with extra fish iii) a small batch with cardamom and then . . . we . . . were . . . done. It was full dark before we screwed tight the last lid and I for one had been on my feet for 14 hours. The days total was just over 70 pots of the warm South. I hope my ActivPal accelerometer was impressed or at least recording. In the end all that's left is a generous handful of pithy, seedy, compost [see R]
Posted by BobTheScientist at 07:44