As I've been writing The Blob for more than a year, there are more than 400 posts to read.  Some of them deathless prose, others a bit slap-dash and shamefully rich in typos.  I must say I am bemused at those which attract over-the-average attention. The current top hitter (25% more interest that any other post) is a perfectly quotidian, not to say boring, reflection on making marmalade.  Someone must have tweeted it, but I can't discover who.  At least that appears to be quite genuine interest; the second "most interesting" post was written a year ago about Milk of Magnesia.  That's a lot more interesting than the marmalade piece but the page-views went through the roof because some imbecile set a robot to advertise in the comments.  It was a while before I worked out how to knock this intrusive nonsense out of the ball-park. Here's another lament about the practice from the often wonderful Tywkiwdbi. 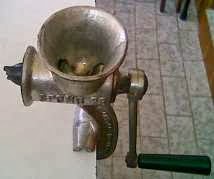 I'll pretend that there is a widespread demand for more marmaladocentric copy.  I made my fourth and final batch of marmalade over this last weekend.  The other batches worked out rather well: all different but all edible.  Marmalade as any fule kno usually has what we, as kids, used to call "fishes" - the little pieces of cooked orange peel.  In the old days you'd make these by slicing the reamed-out orange peel into slivers with a very sharp knife.  I have done this but it takes a long time, so nowadays I put them through the coarsest grind of my old Spong mincer and get klontjes of peel rather than thin slices.  My Mum used to have a Spong mincer and we kids used to fight for the privilege of cutting the remains of the Sunday meat-slab into Spong-sized chunks and mincing it all up for the Tuesday shepherd's pie.

One of the joys of living isolated in the country is that you can fire foodie things out of the door and expect them to be biodegraded. Yard = midden here!  I'm a little precious about our septic system because the settlement tank is about 40m from the house and goes through two right angled turns.  I really don't want to have to rod out a blockage, so I'm really careful about what goes down the kitchen sink lest we get a fatberg.  After marmalade batch three I scrubbed up all the utensils and then got frightie about the orange fibres.  So I seized the washing-up bowl (of course we don't have a dish-washing machine) and fired it out of the door into the yard.  The next morning, I missed the little wing-nut of the Spong which you can see on the left of the picture.  After a good hunt through the kitchen, I realised that it must have been unnoticed at the bottom of the jettisoned washing-up from the night before.  It was also Monday morning and I wasn't going to be on-site in daylight until Saturday at the earliest.  Luckily I had a spare nut, but I don't like to lose things.  Accordingly, the following Sunday I went out scanning the grass within a 5m half-circle centred on the front door for a piece of metal 2cm in diameter.  Lucky I still have my eyes because random pokes would have a 1:100,000 chance of successfully hitting such target in such a field.  It only took about ten minutes but I was immensely pleased with myself - probably happier than if I'd never lost the danged thing.

The last batch of marmalade was rather a disappointment, both lumpy and rather difficult to set.  I had to resort to spooning the glop into the hot jam-jars because pouring from the jam-pan put as much down the sides of the jars as inside.  I'll have to use it in a helluva lot of marmalade puddings over the next couple of years.  Note added in press: I've just noticed 2kg of sugar on the shelf in the kitchen where there were four, earmarked for marmalade. Duh! So now I have an explanation of why the marmalade was wonk and a lesson in what matters in the process of jam-making.
Posted by BobTheScientist at 05:30