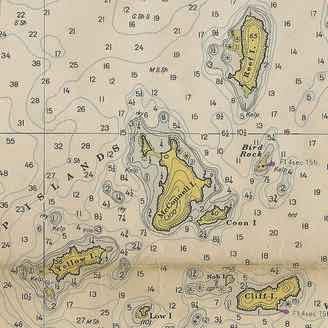 Here be treasure!  This is a nautical chart of the Wasp Islands: a tiny sub archipelago within the San Juan Islands.  For a sense of scale McConnell Island, largest and most central is 12 ha in extent, about twice the size of our Farm of Dreams. The numbers scattered across the sea are (depth) soundings probably in fathoms: the barely legible scribbles after some of the inshore numbers are 1/4, 1/2 and 3/4 which is an unlikely choice if the measure is metres.  On nautical charts, especially if old or US, you occasionally see 42 which means 4 fathoms and 2 feet, of which there are six to the fathom. 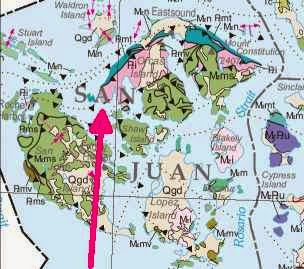 It is the fractal nature of archipelagos that a small one is contained within a larger: in this case the San Juan Islands of which I show, for variety's sake, a geological map [R, the gross pink arrow indicating the location of the Wasp Island, invisibly small at this scale].  Orcas Island the multicoloured U/C-shaped block to the N and E of McConnell I. is about 1000x larger than its tiny neighbour.  Because the US is hopelessly parochial, the information on this map stops abruptly at the border with Canada, hence the white space beyond the thick dark dashed line in the top and bottom left corners.  They laugh pityingly at North Korea for keeping their citizenry in the dark in that Socialist Paradise and suggest that their people are much happier, more free in their Democratic Paradise.  But reflect on the fact that 63% of USCs do not own a passport and that 80% of Congressional elections are won by the person with the deepest pockets, and ask if the difference in qualitative or quantitative. 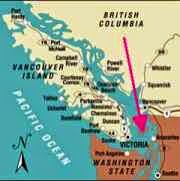 Still hazy about where we are? The San Juan Islands are tucked in the strange jink South where Canadian Vancouver Island (about 200x bigger than Orcas) pokes an intrusive finger into the ear-hole of Washington State USA and breaks up the enormously long straight-arrow border between the two countries set at Lat 49.00 by the Oregon Treaty of 1846.

Still hazy about why we're here?  It's a rather long introduction to a romantic tale of oceanographer Thomas G. "Tommy" Thompson who bought McConnell Island when it came up for sale just at the end of WWII.  Thompson was born in New York in 1888 served with a somewhat murky distinction in the Ordnance and Chemical Warfare Branch of the US Army during WWI and then became a professor of Chemistry in U. Washington, Seattle.  He established an international reputation in sorting out the chemistry of sea-water: measuring such eco-important details as salinity, density and the concentration of trace elements.  As Craig "Sorcerer" Venter discovered two generations later about the oceanic microbiota, Thompson noted that all the parameters he could measure varied across the face of the ocean.  It takes a long time to stir this enormous pot. 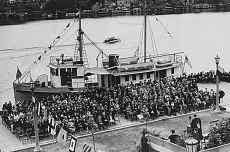 One notable thing about Thompson was that he tithed his income and set aside 10% for research, which presumably meant supporting his students financially.  He certainly supported (and challenged) them intellectually and sent a generation of chemists out into the world the better for having encountered his robust sense of humour and been disciplined by his rigour in the laboratory. We should also give him a hat-tip for allowing, indeed encouraging, women to take a birth is U.Wash's 24m research vessel the MV Catalyst [L all decked in bunting on the occasion of her 75th birthday in 2007] years before women got, say, tenure at Harvard. He loved a knees-up and bought McConnell I. at least partly to party with an enormous throughput of guests at the weekends - in one year 700 people signed the guest-book. Interestingly also, he sold part of his collection of stamps to raise the cash to purchase the island.  His son Tommy Jr. was also an interesting chap - mad about railways.
Posted by BobTheScientist at 06:46