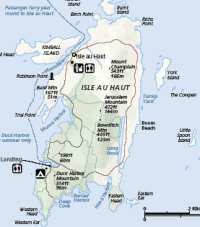 Isle au Haut is a town off the shore of Maine set on an island of the same name. "Town" in the sense that it is a community with a certain autonomy, not in the sense that it has a barber, cinema, two pubs and feed-store. It must have a post office because it's got its own ZIP code 04645 different from Stonington [04681] which is the Isle au Haut mailboat ferry terminal. This all sounds a lot like Sherkin in West Cork which has a tiny population, two hotel/pubs and no shops.  For groceries you have to cross the water to Baltimore.  Isle au Haut has a sort of village centre along the 'Thoroughfare' between Isle au Haut and Kimball Island about 200m NW.  This is where the mailboat sets down its passengers, who have to leave their autos behind on the mainland.  Well not really the mainland, because Stonington is itself adrift in Penobscot bay on Deer Isle; although since 1939 it has been connected to the real mainland by suspension bridge.  The Thoroughfare is remarkably similar to the Main Tickle on the Change Islands. waaaay North off the coast of Newfoundland.  That's not all they have in common, for the traditional way of life in both communities involved a lot of fishing.

I-au-H doesn't even have many people: 73 at the last census of 2010 which are enumerated as 91.8% White, 1.4% African American, 2.7% Native American, 1.4% Asian.  Things are getting excitingly multi-cultural on Isle au Haut nowadays: in 2000 everyone was 'white', of, in diminish numbers, French, Irish, {English = Dutch = Scotch}, Finnish, Hispanic ancestry.  With such small numbers it gets a little intimate: "1.4% Asian" is some family's Filipino maid. You can see from the chart [L] that the population collapsed through the 19thC but seems to have stabilised since WWII at half-a-gross or a little bit more. Half the island, about 1000 hectares is owned by Uncle Sam in the National Park Service as part of the Arcadia National Park. They seem a little authoritarian about limiting visitor numbers but I guess that makes for a richer experience for those who do get to hang out there.

Why do I know/care about Isle au Haut?  Because it is tribbed in two songs by Gordon Bok, who grew up fishing in and around the Bay of Fundy and found a poetry in him that burst out in a handful of vinyl albums of his own songs and some covers. We discovered him on the folk circuit when we lived in Boston and I really like his lyrical, quietly politicised style.  Isle au Haut Lullaby [see chorus at the top of this Blob] or The Hills of Isle au Haut [sung here by our own Tommy Maken and Liam Clancy] can start you off, the rest of his oeuvre you may find on on the youtube sidebar. Here's Gordon Bok interviewed Studs Terkel [part 1] [part 2] [part 3] at the end of the last century.
Posted by BobTheScientist at 07:05