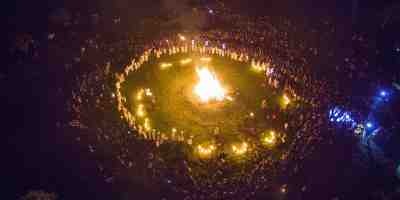 That would be today, or rather tonight, when the sacred fire of Lugh, the god of light, is lit to celebrate the beginning of Summer after a long, wet, snow-drifted, drawn out Winter. I for one will be defying the government bonfire drones to pay my taxes to the fifth province of Ireland: the shadow-world where things happen that we cannot explain. If you think about it, after 3 or 4 centuries of careful observation and clever experiment, there is far more that hard science doesn't know than what is does. Inevitably, in Ireland of the Enterprise, some people are happy to monetise these quasi-religious festivals. You could have bought, for €15 (kids go free), tickets to the Bealtaine Fire Celebration at the Hill of Uisneach if you'd been quicker about it: they are sold out. But you should not worry because there is no magic to be had at Uisneach this year because the exigencies of commerce dictate shifting the event to the the nearest Saturday. Lugh is known to get quite pissed off when earth-bound folk are casual with due process. 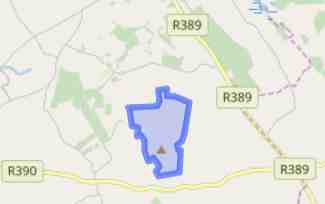 Where? The Hill of Uisneach, more on less in the geographic centre of the island of Ireland shown [L] on the map generated by the wonderful townlands.ie. The R390 is the 'main' road between Mullingar and Athlone and you can't really get more deeply rural than Uisneach - 20km away from a Vodafone shop or an ALDIDL . . . unless you live with us, of course.  The light from fire of Uisneach is meant to be spread across the country by a network of bonfire beacons each relaying the signal to yet more distant communities. I like the idea of such ancient communications among people who will likely never meet but are nevertheless on the same page. And I tell ya b'ys, bonfires are real convenient way of breaking down old pallets and sceach Crataegus monogyna branches too small to make fire-wood and too thorny to make kindling. WHOOOFFFF! Magic.
Posted by BobTheScientist at 07:51