Pete and all the Seegers 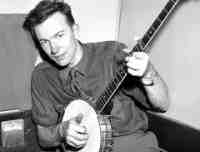 It's Pete Seeger's birthday today, he'd been dead since 2014 and it's his centenary next year but his voice lives on forever. That's his actual, distinctive singing voice but also the issues which that voice articulated. Born in 1919, drafted into the army air-corps in 1942, he served his country until the end of WWII. But he was never one for 'my country right or wrong' and wrote a letter to the American Legion deploring their proposal to deport all people, whether US Citizens or not, who could be identified as 'Japanese'.  'He would say that' [MRDA] though because he was engaged to Toshi Aline Ohta who was half Japanese.  The irony of such racial laws in a country that was taking the high moral ground against NDSAP Germany was entirely lost on the American Legion and the FBI, which started to accumulate a prodigious file on Pete Seeger. Many credit Toshi with being the grit on Pete's oyster. They lived through all the turbulent years the post-WWII World. 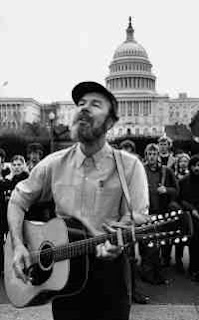 Pete had the distinction of been subpoenaed before the McCarthy HUAC hearings [Ed Murrow prev]. As that quango of righteousness was trying to root out communists from the ranks of the US Army, Seeger was easy pickin's because he made no secret of the fact that he had been a member of the CPUSA ". . . are you or have you ever been a member of  the Communist Party . . . " etc. But he wasn't going to be bullied into grassing up his friends and associates "I am not going to answer any questions as to my association, my philosophical or religious beliefs or my political beliefs, or how I voted in any election, or any of these private affairs. I think these are very improper questions for any American to be asked, especially under such compulsion as this." In so not doing, he showed more spine and integrity than a lot of other grillees before HUAC. He was sentenced to 1 year in jail for "contempt of Congress" in 1961, although that conviction was quashed the following year. That freed him up to take part in all the civil rights and Vietnam War protests on the 1960s. He was also aloud in support of a cleaner and safer environment. 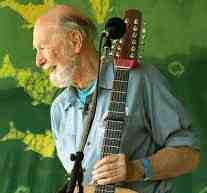