The power house of the cell

Bari, Brindisi and Taranto, the industrial triangle of Southern Italy. I get the feeling that people of my generation learned their Geography for Leaving Certificate by chanting this mantra in unison just as they learned their times-tables in National School 10 years earlier. I've just finished teaching my Human Physiology course and one of the questions on the exam was something like "using a labelled sketch, give an inventory of the contents of a typical human cell and write short notes on the function of each constituent".  In my last final terminal class I rustled up some dopey mnemonics to help the students embed the key facts on some 'potential' questions which might appear on a hypothetical exam. I didn't spend a lot of time doing it because a) I had other things to do the previous weekend b) some other bloke's mnemonics don't work half so well as your own. Anyway, the cell inventory came down to a story about George [ER] Clooney being rejected in love by ?Kim? Kardashian, even after she blonded [peroxisome] her hair. She didn't like the vesicles on his chin and advised him to clean them up, even if he had to use Lysol [lysosome]. She for her part preferred the attentions of Mity [chondria] Mouse because he was so powerful. 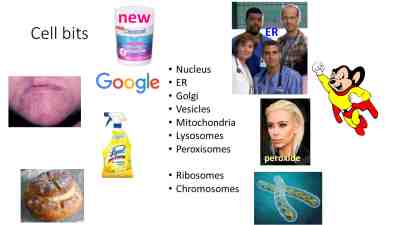 I am delighted / relieved to report that almost every one of my students who answered Q1 on the exam I've just finished marking, included the phrase Mitochondria, the powerhouse of the cell. I doubt if many will remember a word of this 48 hours after they've finished their exam. The other thing I rant on about is the relative size of things in human physiology: y'know that insulin, produced IN the pancreas, must be smaller than the pancreas. With similar reasoning, the mitochondria, as part of the cell must be smaller than the cell. For extra credit you ca estimate how much smaller. It turns out that a mitochondrion is tic-tac about 2 microns [millionth of a meter] long and 1 micron across. Say 2 cubic microns. A cell otoh is about 30 microns across or [4/3πr^3] about 15,000 cubic microns. If they were packed like rice in a sack there would be room for several thousand mitochondria in each cell. 2 cubic microns is about the size of a typical bacteria: Escherichia coli, say, or Rickettsia prowazekii the agent of louse-borne typhus.

My mentor Lynn Margulis was an early adopter and strong advocate of the idea that mitochondria were bacteria which had, a billion years ago, been engulfed by a larger microbe and settled down in a tit-for-tat scratch-my-back mutually beneficial relationship: one supplying power, the other shelter. The mitochondria has long-and-long ago lost any chance of an independent existence and become thoroughly institutionalised in its comfortable billet.  It has shed almost all of its genome, some of the genes having been lost as surplus to requirements and some other transferred to the nucleus and incorporated into the genome. This all happened so  near to the base of the Cambrian that almost everything you're familiar with that you can see - plants, animals and fungi = anything with a nucleus - has mitochondria.

As soon as we started accumulating DNA sequence data comparisons were made with the genes in what was left of the mitochondrial genome with free-living bacteria to see where the ancestor of mitochondria might have dropped in from. For as long as I can remember, the answer is Rickettsiales, the group of alphaproteobacteria that includes Rickettsia prowazekii mentioned above. Although the DNA comparison evidence is entire independent, an alphaproteobacterial ancestor for an engulfed organelle makes sense because other alphas are intra-cellular parasites and shape-changers, some of which we've met before. Wolbachia, for example, as potential agents against Zika virus or river-blindness. Rhizobium, is another, which beds down in the root nodules of legumes and fixes nitrogen for them in exchange for sugar. If you like beans or mushy peas or peanut brittle, you can thank Rhizobium bacteria for making these species grow so well. 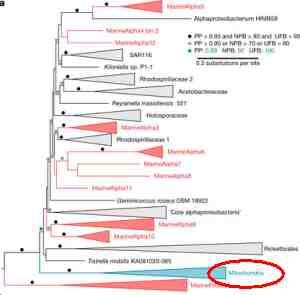 A very recent paper in Nature takes advantage of their being a lot more sequence data available from proteobacteria to assert that we've been wrong wrong almost right about the ancestry of mitochondria. The nearest living relative of mitochondria (see L on the branch circled in red] is probably not Rickettsia but another more distantly related alphaproteobacterial species. I think that this is quite like the story I told  in 2015 about Des Higgins and Dan Graur calculating that whales were descended from artiodactyls like sheep, giraffes and springboks. Naaaah said the editors of Nature: that is in two words in credible; and refused to publish it. A couple of years later more artiodactyl data came of stream which showed that the closest artiodactyl relative to whales are hippopotamuses. Aha! now that makes sense.
Posted by BobTheScientist at 07:20