I don't think I've given Irish Water  a particularly good press but at least I haven't hysterically claimed that water falls from the sky and so should be free to all. At The Institute on Friday afternoon I was prepared to be neutral while the ecological guy from Irish Water explained some of the regulatory tribulations that beset the company in its mandate to clean up the water supply. The other speaker was from Veolia [previously dumping a mountain of sewage sludge across my only access to the outside world] who gave a long technical talk about the latest techniques for cleaning foul water. That was fascinating and I wouldn't have missed the middle 10 minutes of his talk if I hadn't had so much free lunch. When I registered for the two-talk symposium I joked that I was only there for the canapés but the truth is that I'd rather take advantage of any 'extras' which are going down on campus. The alternative is to mark exam scripts and who wants to do that? I've left my notes on my desk at work but I have one story that I can remember enough to do a capella.

It concerns Vertigo geyeri and the plain people of the North-West. V. geyeri is a terrestrial pulmonate gastropod mollusc aka whorl-snail that is nowhere near as big shown [L] but more like this [Arial 10pt] g! I guess I'm here guilty of the same exaggeration for effect as the No campaign in their 2m tall foetal posters. These teeny creatures breathe air but live in wet-lands and don't fare well when their marshes get flooded . . . or dry out. It's a wee bit fussy and so acts as a sensitive indicator species; a bit like a miner's canary. The Environmental Protection Agency EPA have requested and required Irish Water to clean up the water supply for Glenties in Donegal. The water treatment plant is several decades old and cannot cope with either Cryptosporidium [prev] which flush the guts of the plain people of Donegal out goodo OR the mildly carcinogenic trihalomethanes [prev] which are an unintended consequence of chlorinating peaty water supplies.

But Irish Water cannot just fix the water treatment plant so that the identified environmemtal hazards are reduced or eliminated. No, they have to satisfy the County Council Planning Department that their solution to two problems doesn't launch another. Environmental legislation has largely originated in the EU where they have to leisure to care about the environment and the resources to carry out studies and then legislate to protect what they deem in need of protection . . . including Vertigo geyeri. Donegal CoCo doesn't even have discretion to give Irish Water a waiver on the necessary Environmental Impact Assessments. Likewise, the EPA's policies are driven forward by the EU Water Framework Directive / Wasserrahmenrichtlinie / Directive-cadre sur l'eau / Rámcové směrnice o vodě / Vesipuitedirektiivi. Irish Water are caught between the rock of planning and the hard-place of protection and has to pay at both ends. Indeed, all of the players are spending government money in the very Irish pass-time of lawyering up and trying to do the minimum in order to move on.

The plain people of Donegal are thus suffering years of paying for cruddy drinking water and occasionally losing a few citizens to a session of very loose bowels because of a mollusc so small that not even the French would eat it. The Utilitarians among us [meeeeee!] will want to suggest that someone does a risk-assessment and balances the QALYs of 2,000 person/puka-puka days and 20 cases of cancer in 20 years time vs the rights, privileges and utility of 20kg of Vertigo geyeri. 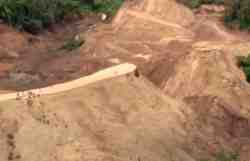 Before you get all shouty and certain about the obfuscation of bureaucracy and the nanny state, we might reflect on another watery disaster that just unfolded in Kenya at supper time of the 9th May 2018. One of several irrigation and water-storage dams on the farm of Mansukul Patel in the Rift Valley collapsed with a >!crump!< [see dam with its own rift valley R] and sent 70,000 tonnes of water downhill in a rush. Unfortunately a large number of Mr Patel's employees and the families lived downhill from the reservoir and 30+ of them are now dead. Well it seems that Kenya's Water Resources Management Authority WARMA had been concerned about the safety of the dams on the estate which had been subjected to a year long drought until torrential rains started to fill the reservoirs this March. Indeed that had recently ordered that the water be dispersed and the dam demolished or fixed The farm manager says that the dams are not illegal but he hadn't been in a hurry to sort out 'normal' seepage.

That's why we have rules and regs and the bureaucrats to enforce them. They are a total pain in the tits when they stop us doing something but without them we'd have more child-killing tragedies, as the pursuit of money outstripped someone's sense.  And what does Mt Patel irrigate with all that water? Roses . . . for the European market . . . a business which works because wages life is cheap out in Kenya and we love roses.

About one dam thing after another, I've had an absurd amount to say,