Down with the Paps

In the middle of last week a surprise exam was sprung on me. I was, of course, wrong footed on this [because it was a surprise] and mildly annoyed because I long ago resolved not to do exams anymore. Lucky I took notes! . . . and that it was Open Book. One of my brightest and most enthusiastic colleagues is on maternity leave and she has been replaced by another one of life's nett contributors.  The latter, whom we'll call La Fadista, trained in the world of Medical Technician and spent some years reading Pap smears in a cervical check laboratory. She wants The Institute to develop a new degree in Med Tech as a counterpoint to our recently launched BSc in Brewing and Distilling. Both ideas are driven by a perceived 'needs of the industry'.  Some time this year during the snows-of-2018 La Fad was stuck with an out-of-schedule Biology Practical, so she made the students do the diagnosis of some cervical smears: asking them to bin each slide into normal and abnormal. Of course, she explained the principles first, showed a number of examples and explained what to look for . . . and then made them commit to a diagnosis on a number of 'unknowns'.

Me and The Other Guy in 1st Year Biology agreed to incorporate this off-the-cuff practical into the manual for next year but to do that we were put through the practical under the stern didactic eye of La Fad. Well I learned a lot, starting with the fact that Pap smear is not named from human papilloma virus HPV but an abbreviation of the Papanicolaou Test invented by Γεώργιος Νικολάου Παπανικολάου, a Greek medical cytologist who realised in 1928 that he could predict uterine and cervical cancer by scanning a microscopic sample of vaginal mucus or a scrape from the cervix for abnormal looking cells. "The first observation of cancer cells in the smear of the uterine cervix gave me one of the greatest thrills I ever experienced during my scientific career." 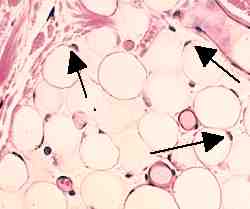 This is a brilliant example of scientific training. You have to be told what you are looking for because, to a close approximation, most people look at a cytological [cells] or histological [tissues] prep and all they see is pink. The trick is to twig that not all pinks are equal . . . and by heck it's not all pink! The prep shown [L] is basically pink but a moment's reflection reveals that the whitish circles are not missing data but something interesting: in this case fat which fills the cells of adipose tissue to such an extent that each cell's nucleus [identified with black arrows] and cytoplasm [cell contents] is pushed to the periphery. The picture is of a slice through somebody's buttock; the cells are really 3-D balloons. The normal cells identified in the blue picture [R above] are squamous epithelium whose purpose is to cover a surface in a thin layer of overlapping scales [Latin squama]. They are definitely not spherical; indeed the need to cover an area makes the nucleus quite small in comparison to the ragged disc of cytoplasm. The cancer cells indicated are no longer squamous, they have bunched up and started their uncontrolled cell-division run: the nucleus is proportionately much bigger.

The technician charged with making a diagnosis is carefully, relentlessly, scanning slides, looking for something that looks peculiar. It could be an obscuring clot of semen (please don't have sex the night before your smear it makes life harder for the person on the diagnostic end). It could be an obscuring clot of red blood cells if it's another sort of bad timing. That noise in the signal could be covering a couple of pre-cancerous cells, giving you a false all clear and a missed opportunity for early treatment.

With the clear connexion between infection by (certain strains of!) Human Papilloma Virus HPV and subsequent development of cervical cancer, it would be nice to have a cytological test for HPV as well as malignancies. If malignant cells are present it may already be too late and will certainly indicate much more invasive, expensive and distressing intervention. Providentially there is such a test. HPV infected cells tend to have two nuclei [arrowed R] with also a sort of halo around them as if the cytoplasm is being pushed clear. That won't be obvious to you-and-me but with experience a competent Med Tech will have these signs leap from the page. Two nuclei could mean two cells stacked one on top of the other. But if you see a clatter of too-close-for-comfort nuclei you'll flag that slide up for further investigation. Further investigation will likely include a PCR-based genetic test for the five strains of HPV most closely associated with cancer. Then you and your doctor will be worried but also extremely hopeful because you're ahead of the malignant posse.

Your smear test will also pick up signs of herpes, chlamydia, actinomyces, other bacterial infections of the vagina, candida = thrush. The thing everyone wants to avoid, and this is the source of the current scandal, is a false negative diagnosis especially under the Irish regime of testing only every 3 years.

So how did I do on my impromptu exam? Not very well! with the help of my notes I was able to clock the HPV infection and the normal. But I missed a cancerous lesion down in the bottom left corner. In a world with rigorous standards that should have cost me my job in the same way as people who kill other people with their cars are put off the road.

Years ago, I went to visit my foster-family in Boston. The day after I arrived The Gaffer and his Dau.II were off for the last of 8 evening classes in Oriental Carpets. I could have stayed at home watching TV or rootling through the file-cabinets and kitchen drawers, but they persuaded me to go along with them to the carpet shop in Watertown where the course was scheduled. As it was a course and the last meeting, it was exam night. Each of the punters was asked three questions about carpet styles from Isfahan to Damascus and if they answered correctly they were given a little souvenir sampler carpet about 35cm square. After each person answered a question, the teacher gave a little lesson to the rest of us about the salient features which confirmed the diagnosis. It was interesting because I'd never paid much attention to such carpets before, although my Dad had picked up a few on his travels. I learned for example that the octagonal 'elephant's foot' motif [R more pink!] is typical of carpets from Bokhara. Everyone in the circle had been through the mill successfully when Teacher said "And the foreign gentleman, would he chance his arm on the knowledge of carpeting?". With some reluctance, I agreed to have a go, answered three easy questions correctly: if you've seen 3 or 4 Bokharas you can't help but get the message - and was presented with a carpet! It's nice, it's sort of useless, it has an elephant foot design.
Posted by BobTheScientist at 07:30