The gall of it 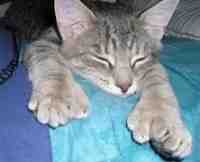 Did you ever stop to wonder at the fact that your arms are the same length? Yes, yes, all the better to clap with; but how does that happen? How come the growth hormone receptors at the end of both fore-limbs are equally sensitive to the flood of GH which emanates from the anterior pituitary almost as soon as that organ becomes a differentiated nodule in the brain. Now, if you look at a lion or a bat, you'll notice that their fore-arms are also the same length but looking rather different from ours. Those similarities and differences were explained in one way by D'arcy Wentworth Thompson in On Growth and Form. We now know a bit more about the genetic basis for how things grow up the way they do. A single mutation in a single gene will trigger the development of extra toes [polydactyl cat R] beyond the normal count of five. We know less about the genetic basis for shape in plants but we are certain that the gestalt is reproducible and recognisable [by my old pal Chris Burnett anyway] within a species and so must be determined by a characteristic pattern of gene expression and growth hormone effect. 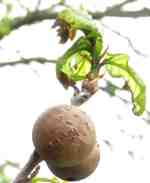 In his book on the Natural History of Hedgerows, Wright is strong, not to say a bit obsessive, on galls where the growth and form of the obvious woody constituents of the hedgy community is subverted by other species so that their offspring are better fostered. Leaves are induced to curl up into protective tubes around a clutch of insect eggs. Oak trees are induced to grow an oak-apple [L source] each of which will contain the larvae of one of maybe 30 species of gall-wasp from the genera Andricus, Neuroterus, Biorhiza or Cynips. If you didn't already know about acorns you'd assume that the 'apple' was the fruit of the tree. If you can't get hold of a copy of Hedgerows, there is a chatty and informative website where you can get a taste for the galling complex web of interactions in English trees. Take, for example, the fungus Gymnosporangium clavariiforme which alternately infects juniper Juniperus communis and hawthorn Crataegus monogyna. The look-and-feel of the parasite is completely different on the two host species, and someone, with the same patience and attention to detail as Maude Delap, must have done some careful observation and controlled experiments to prove that only a single species is involved.

Galls are usually classified as open, in which the plant's growth and form is hijacked to fold over into a tent-like shelter in which the parasitic wasp can lay its eggs; or closed where the larvae induce the development of a complete home with hot&cold running nutrients surrounded by a handy exterior shell. Yes, the plant's stores of sugars and amino acids are partial diverted to support the interloper. You may be sure that other species have evolved to take advantage of the nutritional bonanza, and botanists have a another term inquilinus [L. lodger] for these secondary free-loaders. The effect on the plant can be negligible, presumably for a long-established relationship where the host species has been fighting its corner. But it can also be a devastating scourge threatening the very existence of the plant. In the former case, it may be that the interloper is paying rent in some form so that it is better classified as commensal rather than parasite. At the other end of the scale are parasitoids where one insect will lay its eggs in the body of another which is, in due course, consumed from the inside.

Thoughtful people have difficulty reconciling the existence of parastoids with a benign creator.  In January I quoted Charles Darwin's qualms about Ichneomonid wasps.  Likewise Annie Dillard [prev], another thoughtful observer of the natural world.  "I learn that ten percent of all the world's species are parasitic insects. It is hard to believe. What if you were an inventor, and you made ten percent of your inventions in such a way that they could only work by harnessing, disfiguring, or totally destroying the other ninety percent?". I can see where this is coming from, but do these thoughtful people ever eat meat that has been processed through a slaughter house? Especially one not designed for animal-kindliness by Temple Grandin. And vegetarians, do the lentils not feel pain as you rip off their reproductive parts are stuff them in your vegitivorous mouth?


Posted by BobTheScientist at 07:31