I'm a navy brat, who shifted homes about every 18 months until my father retired when I was 13. I was born less than 10 years after the end of WWII during which both my parents wore uniform and spend some time at the Front Lines. You really wouldn't have known it, though, because they talked very little about the most exciting (and stressful) time of their lives. I have, therefore, some interest in trying to figure out why people do madly dangerous things when duty and training calls upon them to do so. I am also a utilitarian and a scientist so I have an interest if what I may call The Calculus of Death. My father served the first few years of the War in Motor Torpedo Boats MTBs in charge of a lethal weapon operated by a crew of 12. At some level, my father must have carried out risk assessments on a daily basis: was it worth compromising his crew and their expensive equipment to achieve such an outcome with such a probability of success. In contrast to Grand Theft Auto, a miscalculation could leave real blood on the deck of the cockpit. The title of a famous set of memoirs about US Navy MTBs was entitled They Were Expendable.  My father appreciated that, in certain circumstances, he and his ship were also expendable. 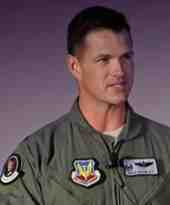 Because of this interest in discovering what makes warriors tick, I found myself watching TEDx talk by Colonel Mike Drowley [L in combat fatigues] There Are Some Fates Worse Than Death.  Drowley talks about shoot-'em-up missions in Iraq and Afgo where there was real incommming from unfriendly forces. In one example, on the very edge of the decision threshold he aborts a rescue mission because he sees that he is risking the lives of 40 Americans to save . . . two. A short while later, he realises that he is over-emphasising the Mission probably at the expense of the Missioneers; and resolves to spend more time thinking about and accommodating the unsexy, boring,  infrastructural aspects of his command. The flight-mechanics, and the rest of the base staff, have to be looked after in the same way as parents have to look after their own oxygen masks before they sort out their children's. Against all his Action Man heroic instincts, Drowley was able to Just Say No.

I was writing about the Nisei, second generation Japanese Americans, the other day in the context of Pete Seeger getting indignant that US Citizens were being sent to internment camps because of their Japanese ancestry. No such ideas were bandied about concerning citizens whose parents came from Italy, Austria or Germany. Despite having their whole community dispossessed, a group of Nisei volunteers were formed into the Japanese-American Combat Team including the 442d Infantry Battalion:  all the squaddies were Nisei from Hawaii and the West Coast but the officers were all of European extraction. This was the same as for African Americans who fought and bled and died for America in black regiments. The 442d became the most decorated unit in the US Army fighting with conspicuous bravery from the beaches of Anzio up through Italy and France. They famously went forward to rescue the Lost Battalion of the Texas National Guard who had been too ambitious in their advance and were surrounded by the German army.   25 minute documentary on the 442d. The 442d sustained far more casualties than their Texan compatriots and the calculus of war was wonk in ordering the relief operation to go forward. This assessment is obvious to us now but, in 1944, the Nisei were not weighed as valuable as white soldiers. They died for their country anyway. 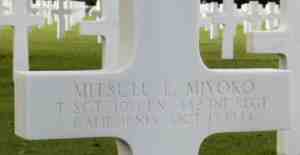