The Midwife of Chemistry 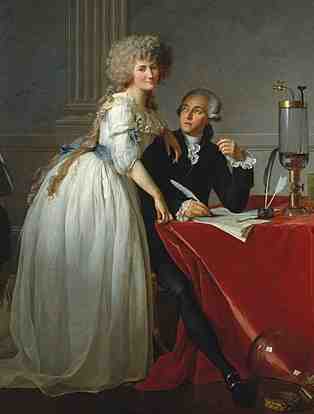 That would be Marie-Anne Pierrette Paulze Lavoisier [shown L at R], who lived through turbulent times in the French Revolution. She was married off at 13 by her father, a senior bureaucrat for the Ancien Régime. The early marriage was in the nature of a pre-emptive strike to side-step a proposal from a 50 year old paedophile aristocrat who was in a position of power over the father. The preferred bidder in the auction was Antoine-Laurent de Lavoisier a younger and more personable aristocrat. Antoine and Marie-Anne were married in 1771 and became one of the most famous married-couple teams in the history of science, with complementary skills and the habit of banging half articulated ideas off each other until a synergistic truth emerged. Yet she is often, literally, photoshopped out of the picture [eg]. I made an ironic comment "Lavoisier hears the doorbell" beneath one such portrait in my 2014 essay about le père de la chimie moderne as the French like to give their boy his puff. The English prefer to give the Father Of title to others like our own Robert "Up the Déise" Boyle or John "atomic theory" Dalton.

Marie-Anne had been educated in a convent and acquired facility in Latin and English which was very useful to her husband when he set up a gentleman's hobby laboratory in his home. The Industrial Revolution was smelting away across the Channel in England and practical and curious men were in high demand. Without nailing the fundamentals of physics and chemistry, the bridges [Coalbrookdale], plates [Emma Wedgwood!], textiles, and steam engines wouldn't work safely and efficiently.  The reports, by the likes of Richard Kirwan, Henry Cavendish and Joseph Priestley, were written in English and Anne-Marie was able to translate them into French. But she was far more than a dull Google-Translate robot. She was able to critique and evaluate the science and the finished text was peppered with her observations and additions.

Come the Revolution and the Terror and both Marie-Anne's husband and her father were executed on the 8th May 1794 [19 Floréal II in revolutionary time]. She lived on for another 40 years, justifiably bitter about the treatment her family had received and watching her husband's rehabilitation, not to say beatification by the the French government. She played a very active part in that rehabilitation as she prepared for publication Lavoisier's Elementary Treatise on Chemistry - Traité élémentaire de chimie (1789), and the earlier Méthode de nomenclature chimique (1787). Even back then, without publication there is no science: it was she who ensured that the offspring of the father of chi=enistry saw the light of day. She was competent in technical drawing and her illustrations in the Traité and the Méthode greatly facilitated those who followed in Lavoisier's footsteps. Indeed she was formally trained in drawing and painting by no less a luminary than Jacques-Louis David, who was arrested during the Terror but manage to keep his head. The picture at the Mast-head was commissioned of David by the happy couple just before the Revolution and probably shows more of their relationship than has come down in print from contemporary writings.

More Women in Science
Posted by BobTheScientist at 07:20