How do you run a democracy? You hold elections and referendums regularly and you ensure that everyone is free to vote as they choose and is absolutely not pressured to vote in a particular way. In Ireland, there is a moratorium on the broadcast media - wireless and TV - having any coverage on the matter at hand from 2pm on the day before polling until after the polling stations are closed at 10pm on The Day.  The Electoral Act on 1992 specifies that Polling Stations must be absolutely clear of partisan election propaganda: no hucksters outside the gates, not posters within 100m of the building in which polling is taking place. Officials ensure that only one person is in a polling booth at a time. Wives may not tell their husbands how to vote, or children their parents. A partisan tee-shirt or badge may be seen as election propaganda and we have been specifically discouraged from wearing any such in the building - or presumably within 100m of the gate. You may not take photographs inside lest you capture a voting slip in the background. This referendum, for the first time, the polling stations can emBraille polling cards so that the blind can cast their vote independently and unpressured.

Also it would be undemocratic to force people to travel long distances to vote, so you need to have a LOT of publicly available buildings to house the electoral officers and their ballot-boxes. For example, the rural Carlow-Kilkenny constituency has 200 polling stations while the urban county of Dun Laoghaire Rathdown can manage with only 38. As a matter of convenience, the network of National Schools [N= 3300] form the back-bone of polling stations and the kids are given a day off. It is a matter of history and demographics that almost all the National Schools are owned and operated by the Roman Catholic Church but that's okay because the political parties are none of them aligned with the church - partly because until recently "everyone" in the country was Catholic.

The referendum yesterday was about repealing the 8th amendment to the constitution to allow, in certain as yet unspecified but very limited circumstances, for abortion. The largest and best resourced institution which has a strong and clearly stated position on such an amendment is the Roman Catholic Church. Oh Oh! Would the facts outlined above given the Pro-Life No Repeal No Abortion position a home-team advantage? Would a truly independent Referendum Commission alert to possible bias re-think the location of the polling stations for This referendum? 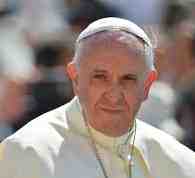 What greets you at the door when you go to vote in a Catholic National School? A statue of the Blessed Virgin Mary and a photograph of Papa Francisco, just in case you haven't quite made up your mind. Now it's not deliberate, it's not a plot, it's just lazy, because even if you 'have to' use the National Schools, steps could have been taken to remove or cover the obvious icons of the Institution with arguably the most skin in the game. But that didn't happen because the Catholic Church, like the poor, is always with us in Ireland. It is part of the invisible background [I write about such unseens a lot]: most people, most of the time, just don't consciously see it there. But if you turn up to vote because you know it needs to be done; but you're still not sure (because it's complicated) as you approach the polling station; would a glance at the head of your church remind you, even subliminally, where The Cross should be put on your voting slip? In the last 'what society?' referendum where the Catholic Church had a position (on divorce), the result was as close as one vote per ballot box.
Posted by BobTheScientist at 07:26