I burned me dinner! I was duo-tasking - it's a long way from multi-tasking that I am able for - letting my humble meal of potatoes and pork-mince simmer in the kitchen; while I read a book in the other room; which was nearer the fire; as Summer hasn't arrived yet at the farrrrm. It's a book about doctoring by Paul Kalanithi called When Breath Becomes Air [buy direct from Penguin = bypass Amazon] and the author was talking about his early rotation in Ob&Gyn and Delivery. I was rivetted and forgot about the saucepan entirely until he left maternity and went to another department of the teaching hospital where he was getting trained.

Trained he eventually was, and bravely decided to specialise in brain surgery. A lot of good doctors flame out at that stage in their career and choose a specialty that is less stressful, more lucrative and has the chance of weekends off or seeing the kids for at least one end of the working day. Not Kalanithi, he worked for all the hours and damaged people that god sent him, and at the age of 36 was on the cusp of Arrival. Just a few more gruelling months in theatre and counselling his patients and he'd land his consultancy. Then, maybe, he'd be able to take his foot off the pedal or have a wider impact on his field than the next case. Then his wife, also a doctor, said she'd had enough on this treadmill and needed to take some self-time to consider her position and, essentially in the same week, he was diagnosed with inoperable metastatic lung-cancer.

"When Breath Becomes Air" is a reference to a short poem by Fulke Greville, a contemporary of Shakespeare,

You that seek what life is in death,
Now find it air that once was breath.
New names unknown, old names gone:
Till time end bodies, but souls none.
Reader! then make time, while you be,
But steps to your eternity.
WBBA is also a book, which headed the NYT best-seller list in the year it came out, about what makes a good doctor and what makes a good death. I've been there before following the fortunes of Sherwin Nuland whose book How We Die gave a physician's eye view that it is rarely anything but painful, degrading, and a mess of bodily fluids. Reading one of Nuland's descriptions brought a bus I was on to a screeching halt when I fainted. While we're on the back catalogue let's cite my piece on Do No Harm: Stories of Life, Death and Brain Surgery by Henry Marsh. Also Atul Gawande's Mortality and Seamus O'Mahony's The Way We Die Now.

Do we need another book On Death and Dying? Perhaps more than we need another cookbook: 20% of the current best-sellers in non-fiction are for foodies. Is this part of the obesity epidemic? Anyway, as I suggested in the first paragraph, this one reads very well and I didn't faint once, so the blood and sputum must be kept more or less under the bed-clothes. Part of the readability must stem from the fact that Kalanithi started adult life as an English major but he had a parallel life in science because he also got a BSc degree in Biology. No more than myself, who was heading for History Economics and Politics until an accident lurched me into science aged 16. I am fulfilling my literary pretensions writing daily for The Blob; Kalanithi only wrote the beginnings of his book after his terminal diagnosis and the manuscript was prepared for publication after his death. He was really too busy in the mill of doctoring to find/make time to write literature. The Forward, by another literary doctor, talks about the cadence in Kalanithi's writing. But I'm guessing that's what I call readability: the story rattles along because the reader isn't brought up all standing by an awkward phrasing or an unreferenced allusion. Maybe it would do well as a talking-book?  Like "The well-dressed man is he whose clothes you never notice" 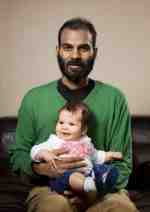 Another edge to the story is that, having been career driven medical professionals, Dr & Dr Kalanithi had put 'family' on hold until they'd reached another goal and another and another. If you think in those terms, it is always better to try for a child next year rather than this year. Having got his terminal diagnosis, before he went for his first DNA-changing medical intervention, they went along to a sperm bank to make a deposit. A short while later, they cashed in those wriggly chips and Dr. Lucy fell pregnant. The girl Cady [R with her Dad] was born 8 months before her father died. He was there for her arrival and she was very much there for his departure.  I hope it all works out for the relicts.

I'm not sure this book worked for me. It has the virtue of being thin, so it doesn't take long to read. But you're still paying the standard whack for the book as, say A Natural History of the Hedgerow, but with only half the words on the page and only 60% of the page-count [I counted]. But there is something 'constructed' about the book, as if it has been crafted for the NYT best-seller list. No harm in that, it might help ensure the future finances of Lucy and Cady. There will be other stories about death-and-dying, and I've cited some above, maybe be they won't read so self-consciously like the book is the elephant on the wall overseeing and editing everything that happens.

YMMV! The authenicity of the voice is what matters. You can get a handle on that by watching Lucy Kalanithi talking about choices and values on TEDMED.  There is no doubt that getting the most out of a best-seller involves a gruelling round of interviews, book-signings and talk-shows for the author. Here's Lucy being interviewed by Channel 4, much less 'noisy' than the equivalent material on US TV channels.

Where's the Science? They shout. I thought it Matters. Well here's a gedankenexperiment that appeared on the first page of my Physics school text-book. Your lungs and mine [a little less for the ladies] contain about 6 litres of gas.  It is a chemical constant that any mole of gas at standard temperature and pressure fills a volume of 22.4 litres. A mole is a gram-molecular-weight and contains Avogadro's number of molecules: that would be a mind-meltingly large number = 6 x 10^23. So your lungs contain 1/4 of that number of (mainly nitrogen) molecules - call it 1.5 x 10^23. Because air is light, all those molecules = a lungful weigh about 4 grams!  That's small, NASA calculates that the total mass of the atmosphere weighs in at 5 x 10^21 grams.  So the ratios molecule:lung and lung:atmosphere are within two orders of magnitude. A bit of jiggling with your assumptions [perfect mixing, exhale volume is not total lung etc.] comes down the statement "every breath that you take [cue Sting], contains a single molecule from the dying breath of Julius Caesar . . . and Paul Kalanithi . . . and lot of termite fart - there are a helluva lot of termites.
Posted by BobTheScientist at 08:15