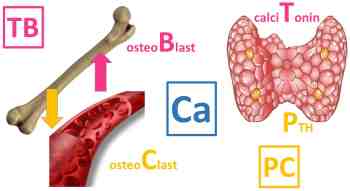 More than 35 years ago I resolved never to sit another written exam again, ever. I devoutly wish that I didn't have to set and mark any exams either, but that change would be far too radical for The Institute. Nevertheless, I operate an, almost effective, No Child Left Behind policy: I make it very difficult for students to fail. To do this, I try to deconstruct the examination process and make it transparent. Listen up!: I don't like mondays marking; I want to make it as easy as possible for me; I don't expect long literate essays, least of all from my Polish students; I am likely to examine any idea that can be compressed into a list of at least four bullet points. One such feedback-loop is recalling the four functions of bone:
Calcium Ca is the third of the physiological cations (positively charged molecules) after sodium Na and potassium K. Clearly, especially according to the Milk Marketing Board, Ca is important for bone strength, the matrix of which is calcium phosphate. But calcium's physiological importance pre-dates vertebrates and all living things are avid for the stuff which is generally in short supply in the environment. It was therefore  a nifty trick to solve the engineering problem of movement by making the rigid struts out of calcium phosphate . . . so you could truck your own supply of calcium about so it was available for nervous and muscular activity. Why calcium is used as a trigger for nervous transmission and muscle contraction is lost in the mists of time but so used it is. Nerves and muscles have evolved so that they need just the right amount of calcium to be available and so homeostatic mechanisms have developed to ensure that this balance is just right like Goldilock's porridge.

The key is that there are two complementary hormones that control the amount of calcium circulating in the blood. You have a gland in your neck called the thyroid [prev], it is pink but it has cells of at least two distinct types, so distinct that someone named the minority type the parathyroid gland - not glands even though there are four clusters of parathyroid cells embedded in the thyroid but producing a hormone, memorably called PTH parathyroid hormone. These cells are not yellow despite being coloured so for clarity in the cartoon thyroid in a mnemonic picture at the top of this post. Other cells of the thyroid proper make another hormone called calcitonin. When blood calcium falls below a threshold, PTH is released. There are cells embedded in bone called osteoclasts which are sensitive to PTH and dissolve the calcium phosphate matrix and leach calcium into circulation. When blood calcium is too high calcitonin is released which triggers activity in another sort of bone cell called osteoblasts whose job it is to scavenge calcium and phosphate from the blood and build more bone with them. It is, like all normal Hum Phys, exquisitely finely balanced . . . until it isn't: clearly something has gone wonk if you suffer from osteoporosis. So this is what we know in the world of bullet-point learning:
For me and my expensive education, I associate osteoclast with iconoclast - an image breaker but that won't be helpful for my pharmacy technicians. There you are: two likely exam questions knocked off in one Blob:
Q1. Describe how calcium balance is regulated in human physiology.
Q2. What are the four functions of bone?
In the belt-and-braces way that is so typical of the effect of hormones, PTH affects not only the osteoclasts in bone but also the gut which is thereby primed to absorb more calcium as it passes through. And remember that vitamin-D's other name is calciferol and that it's also involved in calcium balance. But for answering Summer Exam questions for Human Physiology, let's keep it cartoon simple.
Posted by BobTheScientist at 07:36