Too little not often

With some cancers, early detection is the key predictor for a good outcome. Small lumps are easier to deal with than hideous vascularised masses which have penetrated into adjacent tissue. It's much better if you can initiate treatment before the bugger goes all metastatic and sends deadly pods to invade the brain, liver and kidney.

I heard Dr David Gibbons being interviewed on RTE this morning. For those of you in Ukraine and Italy, not in this parish, I'll have to break the news that cervical cancer screening is in the public eye this last week because Vicky Phelan, a young mother of two small children, is now scheduled to die of cervical cancer because her cervical smear test didn't pick up the tell-tale signs of pre-cancer. Her two children will have a trust fund of €700,000 set up on their behalf as part of the €2.500,000 settlement that the Phelans have secured from the US Company that reported a false negative in 2011. They know it's a false negative because in 2014 Ms Phelan was diagnosed with cancer and the Cervical Screening Service went back and looked carefully at the 2011 slides.

Going back and checking results is a key element of the job of the Quality Assurance (QA) Committee which was established for the National Cancer Screening Service (NCSS) in 2007 before they rolled out their first smear campaign. Dr Gibbons, an expert in the diagnosis of cervical carcinoma, was appointed the chair to the cytology and histology group on QA committee. Everyone agrees that screening is cost effective: if you catch the cancers early, the treatment is cheaper because less invasive and that saves money in the long run because you avoid expensive treatment later on. That's quite apart from the non-monetisable intangibles like women not dying of cancer and leaving orphans and widowers behind and/or women having the full dreadful menu of surgery, chemo and radiation. All of which impact negatively on the QALYs [prev] in each case. Probably because the costs of the screening project were not properly worked out, the Screening Service was rapidly overwhelmed with cervical smears and mammograms to check and so they outsourced the cervical screening to a lab in the USA.

Outsourcing may be sensible for economies of scale in a small country. You can't have every service at every cross-roads in Ireland. This is the core of the debate over whether to centralise A&E or cardiac services in a few properly resourced and effectively manned locations and shuttling patients to the treatment centres or, as politicians prefer, having a shiny CAT scan in their local hospital even when there are no effectives to drive it. But Dr Gibbons is asserting that outsourcing cervical smears to America is only an economy if it works and, vitally, that the US lab works on the same schedule as the Irish gynaecologists who are sending the smears for analysis. In Ireland the practice is to screen women every three years and look really closely at each sample: cytologists in Ireland scrutinise only about 30 smears a working day. In America they do the smear annually and can be a little more cavalier (80 smears a day) in the analysis: if you miss something really small one year you'll catch it on the rebound in 12 or 24 months time. Neither practice is wrong until they collide: if you outsource from Ireland, a fraction of women will, like Vicky Phelan, have their early signs missed and not come back for 3 years. A carcinoma can make a lot of headway in 3 years. 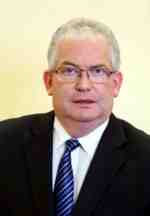 Dr Gibbons raised his concerns with the head of the screening service Dr Tony O'Brien [R] and was told to get back in his box because "when the National Cervical Screening Programme was established, the process that was chosen followed best international practice of countries that had well-established cervical screening programmes."  Ahem, not so, if you follow Dr Gibbons' logic above. Dr Gibbons said in 2008 that the Screening Service and its parent the HSE were going to reap a whirlwind of missed and mis-diagnosis in 10-15 years time and resigned from his position on the QA Committee. The whirlwind is now, the capo di tutti capi head of the HSE is the same Tony O'Brien who was so certain of his rectitude ten years ago. Dr Gibbons is exceptional among people who have senior positions in the Irish Health Service because he resigned on a point of principle. I can provide a sword if anyone believes they should fall on one.
Posted by BobTheScientist at 10:49