Have you noticed how almost all Protestants have Protestant parents? It's because most people, most of the time, are not critically evaluating their choices; they are rather rolling with what is easy, normal and local. You can extend this reasoning to every aspect of society and our behaviour. In the Pub it's "Will that be the usual, sir?". We're still supporting Man.U. years after we stopped dribbling the ball
and just dribbled.  I put it to you that we'd all be better off in a happier, more open and more tolerant society if more of us changed our minds more often. There's a word for it: Metanoia, which word-a-day is urging us to use more often: it is a noun from Gk μετάνοια A profound transformation in one’s outlook. 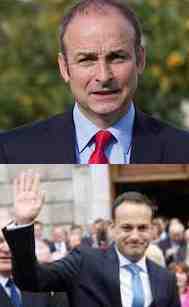 I am, because they are rare, much taken with people who are capable of changing their minds. A piece I wrote a while ago cited The Edge Question for 2008: What have you changed your mind about and why? As it happens both the leaders of the main political parties in Ireland - Leo Varadkar, [R below] Fine Gael and Micheál Martin [R above], Fianna Fáil - had a salutary change of heart (within a few days of each other) during the run-up to the Repeal the Eighth referendum about which I'll soon stop gabbling [backlog] - promise. I say salutary because a) they came round to Yes b) at a time when it was by no means obvious that Yes-Repeal was the The Wave of the Future c) It is a nice change for politicians to be leading from the front rather than rowing desperately in the wake of public opinion to secure another term at the next election.

For Varadkar, his volte face was achieved by listening to two of the many Difficult Cases which engaged the media at the time but also after Martin had announced that, for him, the Eighth Amendment was a cruel and unusual punishment which just didn't deal with the reality of crisis pregnancy in Ireland. I got the feeling in January 2018, that someone close to Mr Martin had bluntly told him that crisis pregnancies didn't only happen to women Out There. The alphabet soup of A B C D X & Y evidence / cases / anecdotes had all been available during all the years when Martin had been content with the post 1983 status quo, but suddenly he announced his conversion. Who knows? It doesn't matter why, it matters that his change of mind made a significant change in the tenor and impetus of the debate.  Likewise Varadkar.

In the spirit of David Attenborough, I'll show a picture of some endangered species, 31 Fianna Fáil TDs and Senators who nailed their No colours to the SS Love-Boat on 3rd May 2018: 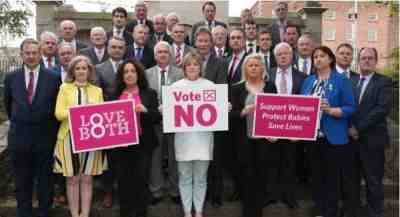 These chaps [mostly chaps as you see despite pushing the five women to the front] will now be hoping that a general election is not called anytime soon. They have some overlap with the 32 TDs who voted against holding a referendum [full list at link] at all at all. And to be fair, there's also a good few Fine Gael and Sinn Fein pols who are adamantly No. Please remember their faces when they come round asking for your vote and ask them whether they've had any sense of metanoia so as to better to represent the will of people.
Posted by BobTheScientist at 07:53