Go easy on the antibiotics

Does MRSA put the frighteners on you? What about CRE?
Q. How do they make up these acronyms?
A. [Pick-an-antibiotic] + [R-for-resistant] + [pick-a-microbe]
You shouldn't worry unduly about these nightmare superbugs because you have probably been exposed before and your immune system is primed to deal with them as they present on a dodgy burger served by someone with poor food-hygiene. Your Aunt Jenny otoh going in for a hip-replacement really should worry because she is likely to come out in a box on account of there being a lot of MRSA about (up 30% of Irish noses) and Jenny is old and her immune system is slowing down. She needs a bit of help over-coming nosocomial (hospital-acquired) infection and we've squandered the antibiotic discoveries of Alexander Fleming and others by using them as growth-promoters in battery chicken factories.

That's bad, especially for Jenny, but largely in the past: we can't turn back the clock and limit the use of antibiotics to 'vital' treatment. Turns out that dosing infants with antibiotics may also pay forward in deadly coin by limiting the effectiveness of vaccination.  I say this because of some evidence about the interaction of antibiotics and antibodies in mice. Here blogged. Here the original Elsevier pay-walled paper. Remember that almost all of biomedical research works on the model of if it's true for mice it is quite possibly true for humans. First we'll have the Elsevier executive summary for the tweet-and-manga generation: 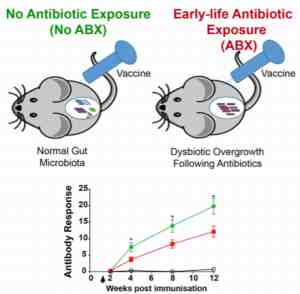 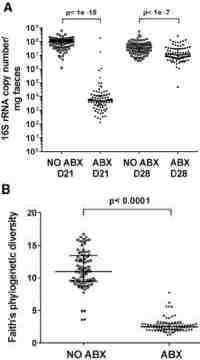 I'll develop that a bit because it may be important. What the group from SAHMRI, Adelaide have done is treat mother-mice and their offspring with oral antibiotics ampicillin and neomycin for different amounts of perinatal  time and then measure the quantity and diversity of their gut flora. Not surprisingly the flora took a hammering under the antibiotic regime [L]
The gut-microbe situation [imagine a human home with a septic infant who has been treated with augmentin] will get back to something approaching the status quo ante in time because the sibs, the parents and the family dog will be liberally sharing their bugs with the wean as s/he recovers. That's all very academic, and you might be tempted to cry So what? Particularly if you haven't read my report on how gut Lactobacillus is a key cog in the chemistry of maintaining blood pressure.

Blood pressure is important but Lynn and Co from SAHMRI are in the business of controlling pathogenic infection in children. If you don't survive to adulthood because you've been whacked by infectious diarrhoea, malaria or TB, then a healthy blood pressure in middle age is moot. They are convinced that vaccination is a key element in boosting the immune response to pathogens. What if, they wondered, the normal gut flora is an element in ensuring the efficacy of vaccination. Many vaccines have adjuvants, like Alumina, which work by geeing up the immune system to recognise the added pathogen but nobody really knows how adjuvants work. IF there are 10,000 species of bacteria in the normal gut each making several thousand proteins contributing to several hundred biochemical pathways ANDIF this complex eco-system is managed by our immune system (so we don't die or have persistent coughs or spend hours on the toilet) THEN maybe the normal flora is relevant to the response to vaccination.

Team SAHMRI did a lot of parallel experiments testing the response to BCG [TB]; meningococcus B (MenB); meningococcus C (MenC); pneumococcus conjugate vaccine (PCV13); and the INFANRIX Hexacombination vaccine (Hexa) which contains antigens from hepatitis B, diphtheria, tetanus, pertussis, Haemophilus influenzae B, and inactivated poliomyelitis virus (IPV). All of which are routinely applied to tiny Australians. They found that, in almost all cases, after vaccination there was more immunoglobulin G aka IgG circulating in the antibiotic-free mice than in those treated with antibiotics before vaccination. I've shown the data for menC [L] which shows neither the clearest nor the noisiest difference between IgG concentration in NOABX vs ABX.  Production of pathogen-specific IgG is known to be a key element in the immune system's response to infection. There is lots more belt-and-braces experiments described in the paper including a rescue of the flora in ABX mice with a fecal microbial transplant FMT, which has been shown to be so effective against C.diff. But I won't overwhelm you with details - you'll have to pay Elsevier for them. This-all suggests strongly that a course of antibiotics in first months of life may adversely affect the subsequent response to vaccination. Ho hum parenting is so damned hard: you take the kidder to the doctor because she has ear-ache and she gets a course of antibiotics. You-the-parent would never think that this action to spare your baby pain will be responsible for a gruelling bout with the whooping cough two years later because the pertussis vaccination didn't take.

Full disclosure note: David Lynn did his PhD in St Vincent's Hospital under my co-supervision. My supervisory style was similar to the way we allowed Dau.I and Dau.II to educate themselves at home: "shut up and get out of the way". You can see how effective this strategy can be, because The Boy Done Good.
Posted by BobTheScientist at 07:30