Let's hear it for Kiwis 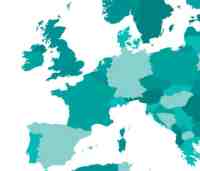 They [here = The Man, Auntie, the Beeb] must think we are plug ignorant. . . probably because we are. Take the BBC's Missing Country Quiz to find out how little you know. The deal is that a four-colour map [it's a theorem: bloboprev]of some part of the world is presented in which one country has been dissolved into the [white] sea. Your starter for 10 shown R. If you think this must be a trick question because it's obvious, then you won't need the help which the BBC provides by reducing the possible answers to a MCQ N=3. Here is it Portugal, Italy or Greece.

I won't be sending the Quiz Link the Dau.II the Sporcle Queen lest she take it up as an insult to her knowledge of the naming of parts about the world. The last question erases New Zealand from the map. This may be the whole point of the quiz, because erasing the Kiwis from the cartography geography is a bit of a meme. There's a whole website worldmapswithout.nz devoted to flagging missing cases. Here's Murray from Flight of the Conchords a) looking older b) phoning head office about being lost in limbo. The woman at the other end of phone is Jacinda Ardern Te Pirimia o Aotearoa. Who is clearly a good sport, as well as being Left, young (b 1980), cool with cannabis, down with the gays and pregnant. The fact that she was brought up a Mormon and now isn't shows that she can think about fundamentals: anyone who changes their mind as an adult is okay with me. Jimmy Carr having an anti-heckle with the PM on NZ TV. And I'm down with the haka too.
Posted by BobTheScientist at 07:30