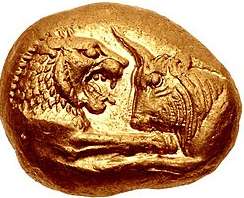 Croesus was King of Lydia [560-546 BCE], in Asia Minor, now the West End of Turkey. He  was fabulously wealthy and successful in all his endeavours . . . until he wasn't. His beloved son Atys was killed in a hunting accident and his wife topped herself during the sack of Sardis, the Lydian capital. Losing those closest to you, especially out of order [father die, son die, grandson die is one recipe for good fortune], is usually accounted a tragedy. Wealth is associated with Croesus at least partly because he invented money [example L]. His government produced coins of fixed level of gold purity and stamped them to attest to this quality. Merchants and traders everywhere found this a really handy, reliable, medium of exchange and Lydian coins had a premium like Maria-Theresa Reichsthalers in the 18thC; British sovereigns in the 19thC; and the almighty US dollar did in the 20thC. The word dollar is, indeed a corruption of Thaler.

But we're here for the happiness not for the loot. It's hard to know much for certain about Croesus because he quickly became the stuff of legends. Even his mode of death became more fabulous with each retelling. At the height of his powers, he invited Solon, the Athenian statesman and philosopher to visit so that he could learn something useful about how to live. "Who is the happiest man who ever lived?", he asked . . . expecting the Me Me Me answer "Why you, O gracious and most powerful king!". But Solon wasn't having any of that sycophancy and spoke the truth (as he saw it) to Power; citing a succession of quite ordinary folks who were dead.  It forced everyone in the room to reflect on such, now tired old, saws as carpe diem, live in the moment and call no man happy til he's dead. Happiness, in Solon's estimation, is more than being lucky [in your birth, on the Lotto]; ghastly misfortune stalks us all, ready to snatch the paltry trappings of success and deliver misery and pain.

I've encountered a tuthree short bios recently that point to a life well lived, (which is surely the aspiration of all who are not totally damaged goods?):