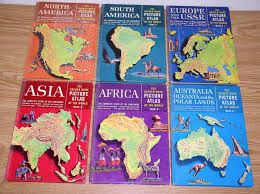 When I was a nipper, there was much less choice in books, maybe particularly children's books. One year I was given a boxed set of the Golden Book Picture Atlas of the World. Six volumes for the six continents, published in the USA in 1960. I loved those books: there were maps, there were pictures of evocative foreign places: steel works in Poland; a Dutch cheese market; peasants all over picking grapes, scything or threshing wheat, planting potatoes. A few nights ago, I needed a map of Switzerland, the internet was on snooze, an Atlas was two steps away, so I reached down Book 3 Europe and the USSR.

The Book 3 map for Switzerland was shared with WEA, France, Germany, Austria and the Low Countries, named only 17 Swiss towns [Quiz: name them? answers at the bottom] and was the size of a regular postage stamp, so wasn't really suitable for my query: where is Zermatt? But as I was there I started to leaf through this snap-shot of what somebody in Baltimore in the late 1950s thought American schoolkids should know about The Old Countries. It seemed to be a string of clichés masquerading as fact, but then, what can you say about a whole continent in 100 pages that won't seem a bit random to somebody who actually lived in Czecho or Belgium at that time?

Random is a bit of a trigger for me and I set Excel to generate 10 random pages between 194-287 and 1 random sentence from each of those pages. That's about the survival rate from manuscripts that were in the Library of Alexandria before it was torched by the Romans in 48 BCE. What would the intelligent aliens who come after us make of "Europe" if only 10 sentences survived?

In 2018, I did a similar sample of words from a foreign phrase dictionary.

Golden Atlas Swiss towns: Basel; Bellinzona; Bern; Biel; Brig; Fribourg; Geneva; Horgen; Lausanne; Lucerne; Lugano; Sion; St.Gall; St.Moritz; Visp; Winterthur; Zurich. Cartographers make decisions on what to include based not solely on, say, GDP or population. St. Moritz [pop 5,000] makes the cut because nothing else is happening in SE Switzerland; while La Chaux-de-Fonds [38,000] in the NW has a lot of characters.

For up to date information [you know you need this], the 20 most populous urbs in Switzerland are Basel; Bellinzona; Bern; Biel/Bienne; Chur; Fribourg; Geneva; Köniz ; La Chaux-de-Fonds; Lausanne; Lucerne; Lugano; Schaffhausen; Sion; St. Gallen; Thun; Uster; Vernier; Winterthur; Zürich;
or more usefully in order of size: Zürich; Geneva; Basel; Lausanne; Bern; Winterthur; Lucerne; St. Gallen; Lugano; Biel/Bienne; Thun; Bellinzona; Köniz ; Fribourg; La Chaux-de-Fonds; Schaffhausen; Chur; Vernier; Uster; Sion. in 2019, I showed myself just how plug ignorant I was about the political geography of the PRC. I'm on slightly surer ground with Swiss geog but must confess that I'd never heard of Winterthur [pop 110,000 bigger than every town in Ireland except Dublin, Cork, Galway and Limerick].