Like loadsa kids, I learned to ride a bike at about 6 years of age. Thereafter I rode just as fast as I could; because boy. Going too fast caused some mishaps, none fatal. But I wasn't nuts about bikes like some of my pals. I found that bikes were an efficient way of getting from here to over there. There was a time, in my first proper job, when I gave up cycling to work because it made me insufficiently aware of the journey. Shank's mare - for yer mindful man.

It all changed when we came back to Ireland in 1990 [Jakers, 30 years ago!]. For impractically romantic reasons we elected to rent a rambling old, draughty old, farmhouse out near the Airport. It was about 12km from work in Dublin City Centre. The miles clock up when you commute 25km every day. I think, just prior to my last RTA, I had 40,000 km under my belt: that's one circuit of this our blue planet. 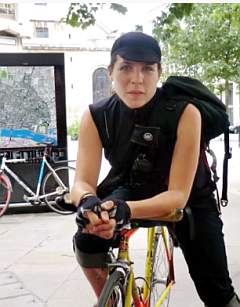 But it's not about me today, it's about Emily Chappell [L] who, in the 00s, was studenting through her second degree and aspiring to land an academic job in due course. The words were going round and round and not coming to land on the page, so she took a job as a bicycle courier in London. She found that was even harder work: dirty, widely contemptible, physically exhausting, occasionally life-threatening . . . but it sang to her. She worked in the collect&deliver trade for six [6!] years, covering about as much tarmac in a day as little old commuter me did in a week. She was often the most productive rider on the books of the small company she worked for and was Courier of the Year in 2010. She won partly because of a mad protestant work-ethic but also because she flew and because she worked clever: always thinking about how to get from here to there efficiently. You can take the thinker out of academia, but it don't stop them thinking.

She started a diary and a blog and eventually wrote it all down in a book What Goes Around [2016 Guardian + Faber&Faber] which Dau.I looted from the shelves at work and sent down with the last courier from Dublin to Boondocks. It's wheely readable. Those couriers have a tremendous if laconic esprit de corps and become legends in their own road-world . . . if they stay the course. Many aspiring couriers, often students, start in the Summer but bottle out when the weather gets persistently wet, drab and filthy. If you survive a couple of Winters you'll be known = recognised by a minute raising of the chin of other couriers as they whizz past. Eventually Emily moved on - cycling from London to China, easy stuff like that. If you listen to the cited interview you'll realise she's since written another book. So that's me bday present sorted this year.

PS. When Emily was on the street she stopped for red lights, and she never rode on sidewalks. Me, I never rode on the sidewalk, because pedestrians /kids were more vulnerable than me. We both certainly jinked in and out of stationary traffic. If car-drivers choose to transport their sorry selves around the city in a tonne of steel and plastic, they are collectively to blame for being in a linear car-park every morning and evening. Yes, even my humble Yaris has a curbside weight of 1,000kg. There's a certain type of car-driver who resents the fact that cyclists make progress along the road while drivers are merely progressing their DuoLingo. If that resentment comes up against fear in, say, a near miss then the result can all too easily boil over into road rage, a lot of cursing and foolish / dangerous behaviour. Emily put in more miles than me and was in more of a hurry so accumulated a fatter portfolio of such incidents. Physics says that cycles are more stable at speed, and again it's not safe to cycle in the gutter. She took to carrying a camera around with her and stopped to ostentatiously photograph drivers who behaved in a dangerous or threatening manner.

After a particularly shaking incident she was off-loading back in the dispatch room and her controller had a look at the van in the picture and was able to make out enough of the logo on the door to twig that the company operated out of premises just down the street. Soooo, hard chaw that he was, Emily's gaffer phoned his oppo in the van company and told him to .  never . threaten . any . of . his . couriers . again. It was like my neighbour who "arranged" for The Boy's bike to be returned after it got nicked by another kid. We have nothing to fear but fear itself.