I was in the newspaper a couple of weeks ago. The Wexford Science Café devoted their Dec and Jan meetings to Coronarama, vaccines and messaging. The deliverable was a Press Release asserting that, if journalists wanted some Sense About Science on the pandemic and its control, then they could call The Immunologist, The Pharmacist or The Communicator from our ranks. My contacts were also there as The Convener of WexSciCaf.  Simon Bourke, enterprising chap from the Wexford People called us all. As readers of The Blob may suspect, I can get a bit over-gabby when I'm on stage and without a script. Suddenly I've said something that may be true but isn't really helpful in a discourse that needs clear messaging. I stopped the clock after talking to Simon for a bit and expressed concern that he'd go controversial rather than Keep It Simple Stupid on the desirability of getting [almost] everyone vaccinated ASAP. He replied that keeping readers (and contacts) content was the sustainable model for effective local journalism: ensuring that everyone was mentioned / pictured when Taghmon National School won the tiddly-winks. if you annoy your sources they dry up.

We don't need to get everyone vaccinated: people with organ transplants [and immuno-suppressive drugs] get a free pass and we-the-people can carry a quota of anti-vaxxers who will ride disease-free on the sore arms herd immunity of the rest of us. But we do need a goodly proportion if we're to knock this disease on the head. How big is "goodly" depends on the R-number, the transmissibility, the infective period and will be different for each disease. And we need to do it quickly because every day there is a set-back or a cock-up on the roll-out more, particularly elders, will die. The capitalist world has delivered a worrying level of choice on the vaccine front which is fuzzying up the message. 40% of French people are now likely to refuse the vaccine - especially if produced in China. Brits only want the AstraZeneca-Oxford Vaccine because it injects an invisible, but highly effective, Union Flag into their arm.

AstraZeneca seem to have booted their Phase-III trials by not including enough pensioners. This means that there is insufficient evidence that elders will benefit from that variety of vaccine. [Because AZ is British?] German newspapers led the charge with stories that AZ vaccines shouldn't be wasted on old people but reserved for younger people where there is good evidence of efficacy. The Irish Government has also drunk this Kool-Aid and this decision has thrown a spanner in the works for planned orderly vaccine roll-out. Changes in the protocol are a disaster for messaging. It gives traction to doubters and we really need to bundle people along on a known trajectory. In my piece in The People I shared the fact that, by overthinking the issues aged 21, I didn't get The Boy vaccinated with MMR; that two years later in the middle of a road trip he contracted measles; and two years after that we confessed these facts to a doctor in Boston. The incredulous reaction [Did you say you come from Ireland or Eritrea?] was humiliating. 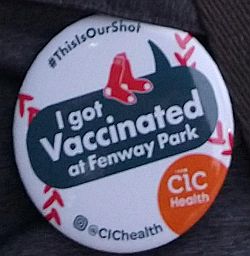 Boston? We had wonderful news from Fenway Park  yesterday. My dearly beloved foster mother and widow of my mentor got her first shot. I don't know, and don't care, which variety of vaccine she took because whatevs! Any and all of them will provide a degree of protection and as far as we can see there have been zero serious adverse reactions to any of them. As older folk are disproportionately likely to be seriously affected by a dose of 'Rona, there is a numerical argument that they should keep their place at the head of the queue even if there was evidence that a given vaccine was less effective in that age-group. The Conversation gives some numerical examples. These show that you can save more lives by using a less effective vaccine on a more vulnerable group. By leaving them unvaccinated they are more likely to cop a 'Rona. That argument is, contra Lord Sumption, treating all lives as equal.

Elected governments don't have the stomach to do a QALY assessment on who gets shot. Saving the life of a young mother is going to do more good for the tax-payer's collective bank balance than saving the life of the 90-something great-grandmother of those same children. Likewise, if you are moving the most vulnerable to the head of the vaxx-queue, age is a really good proxy. But obesity is another strong indicator of Covid-risk. Governments really don't yet have the stomach for prioritising fat people for vaccines.

Finally, because we need clear message, a confident statement from Zeynep "Ever Good Sense" Tufekci "I can, without a hesitation, say that of the ones I know are being considered in various places in the US, UK and Europe—Moderna, Pfizer/BioNTech, J&J, Oxford/AstraZeneca, Novavax—I would be happy with receiving *any* of them. I would easily recommend *any* of them to anyone I know, whatever they were offered."