There is much talk about the value of money as the government shovels €uromillions at ordinary folk whose livelihoods have been terminated by the pandemic. Apparently we don't need to ask where the money is coming from because interest rates are so low that governments can borrow money from the future and pay back ounces in the tonne in 30 years time. Money, both folding and chinking, is worth what it is because someone stoutly maintains that this piece of paper can buy you a bun and a latte and we all [lit] buy into this fantastic notion. The value is wholly arbitrary . . . until it's not; and a particular coin or note can acquire premium value because of its rarity or associations. Presumably the 2p coin that struck soccer star Rio Ferdinand in the face in 2012 could be sold for more than 2p. Provenance and a copper-fastened audit trail is essential to connect the event with the artifact. Otherwise it will be like the fragments of the true cross which together could re-roof St Patrick's Cathedral. 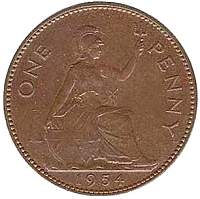 When I was at school in England, there would be occasional fads about coins. That was reasonably healthy because the urge to accumulate a "collection" wasn't siphoning money off to a rapacious middle man as with Pokémon cards or Hairdorable dolls. One thing we'd do is try to collect a penny for every date in the 20thC and the lads would be paying attention to their change and swapping their dupes until the fad faded and the next cool thing gained traction. There were books available where information about relative rarity and value [depending on condition naturally] were exhaustively listed. I knew that I'd never get a penny from my birth year [R] because only one was minted that year in the UK. Actually, the lads at the Mint struck several but kept only one. There is an outside chance that one or more of these super-rare coins were half-inched by someone on the Mint payroll. But dealers / auctioneers will look really carefully at any that are presented because it is much more likely that one of the numbers in the date has been carefully grafted from another coin. It's worth the trouble because it would be worth £'000s if you could pass one off.
The other interesting penny is 1933, a year when there was a glut of circulating coins and so no more were required . . . except for memorial sets. These were in demand for inserting under the foundation stones of public buildings that were constructed in that year. Less than ten years later, thousands of public buildings were destroyed in the Blitz and it's possible that some enterprising and numismatically aware people went in for some targetted rubble clearance.  In the run up to Decimalization in 1970-71 there was a flurry of interest in old pennies before they were demonetized. Some truly enterprising cons did their homework and excised the foundation stone from the church of St. Cross, Middleton, West Yorkshire and made off with a 1933 penny. It's not worth Lotto money, and it might be difficult to fence it, but a 1933 penny was sold for £150,000 in 2016 in California. Check out Ireland's Own OldCurrencyExchange for rich details with statistics and clues for fakery.

One of my few regrets is that I didn't salt away £2 worth of old pennies [N=480] when they could be had for £2. An old penny was at the time the largest and heaviest coin circulating in Europe: they weigh in at 9g and are a chunky 31mm across. Just the thing for card games like Newmarket that require monetary tokens. I have a canvas bag full of miscellaneous world coins but it's not the same thing as having a uniform set of real money. Weirdly, since the New Year I've just established myself in an 'office' upstairs where the central heating works. A little oak desk, which I've had since ever, is just big enough to hold my laptop and the external keyboard. One of the pigeon holes is full of 35mm film canisters full of small change left over from my pre-euro days as an international traveller. One of them is full of British shillings aka a Bob! [that's 12 pennies in old money] and my previous self seems to have filleted out and kept a run of these coins from 1948 49 50 51 xx 53 xx 55 56 57 58 59 60 61 62 63 64 xx 66.These coins sell for ~£1 on Ebay = 20x face value.