I grew up a navy brat; knowing the difference between a sheet and a halliard and the mnemonic there is no more red port left in the bottle. The other side of the boat, or the channel, is starboard: clearly there were no colour-blind navigation officers! For my parents the RNLI lifeboats was the charity of choice and very many of the incommming Christmas cards that they recorded each year were supporting that charity. I've written a lot in support of this position which I articulate as, apart from doing good, the RNLI allows people to be their best selves or, in a word, heroic.

Last Fall I gave back a tiny token by returning a couple of my father's pictures to Dunmore East where he, in his turn a navy brat, grew up. All the chat on that lovely late Summer evening was about the imminent appearance of Dauntless Courage by David Carroll a book "celebrating the history of the RNLI lifeboats, their crews and the maritime heritage of the Dunmore East community".  A met David a few years ago at a heritage & history centennial commemoration. We have a particular and peculiar small-world connexion. My grandfather was Harbourmaster at Dunmore from the foundation of the Free State until 1947. My father slept in the other bedroom of the tiny 2-bed Harbourmaster's cottage on the quay from 1922 until he left home for boarding school in The North and subsequently to the Britannia Naval Training School at Dartmouth. I guess he slept there also when he came back to visit his folks. When my grandfather retired the post was taken up by Captain Desmond Carroll, David's father.  I've reflected before on how my father was honest but not priggish or rigid, and that this was a good thing when dealing with [in]discipline on the ships under his command. To evading government currency restrictions, from David's memoirs, I can now add defacing government property to the list of rules & regs ignored by my Old Man "He had a son called Llewellyn who I suspected slept in my bedroom a long time previously. A compass had been carved into part of the wooden window frame and we always credited Llewellyn with this. From a very early age I therefore knew where North, South, East and West were located and knew if the wind was blowing from the north, it was coming from the direction of Councillor’s Strand and this was the one that was feared as the harbour was unsheltered from this direction".

That tale doesn't feature in Dauntless Courage because it is really off topic but it's the kind of detail which peppers the book to make it more than a series of lists and tables of who was in which edition of the lifeboat for each significant 'shout' from 1884 to 2020. The book is valuable because it consolidates a lot of archival material, including many reports from undigitised newspapers into one place. It is therefore of interest locally, but also useful to future researchers in the wider area of rescues at sea. It is profusely illustrated with facsimiles, drawings, paintings and full colour photos and weighs 3 lb 1.25kg. You don't want to read it in bed: the tales won't help you sleep and you may do yourself an injury if you do drop off. 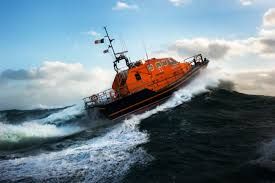 One interesting development is the relentless increase in power and technological sophistication in lifeboats. In 1884, a crew of men put out to sea under oar and sail often in appalling conditions and snatched sailors from certain death in the angry and unforgiving sea. Modern lifeboats set out [as L] at 25 knots with radar and search-lights, radio for updates and the helicopter for back-up. It doesn't in any way lessen the courage required; partly because bigger and better RNLI boats will undertake rescues impossible for open row-boats.

Dauntless Courage also gives credit to The Infrastructure: a small army of [mostly] women who come down to the harbour when the maroon goes up and start clapping together ham and slices of bread and brewing a mighty tureen of tea the colour of tomato soup. Whatever the outcome of the adventures at sea, people will need that tea and hang-sangwiches when they return cold and wet . . . whether it's an hour or 14 hours later. Those same people organise the fund-raising: table-quizzes, flag days, cake sales.  Wherever you live, give generously to the RNLI and if you live near the coast think about volunteering.