What I meant was

I was on a Thelma & Louise last week with an inexperienced driver and someone else who got up to 3rd gear doing circuits of a bucketty 1 hectare field when she was 12. It was fine: there were no cops chasing us . . . partly because we elected to drive through the midle of Midleton and get some mentored experience of town-driving and avoid-not-evade a known Garda checkpoint on the Midleton by-pass. And although we went along the Déise Coast Road nobody drove over a cliff. That was all good.

We started talking about what is forbidden according to the RSA Road Safety Authority but actually common on Irish (and other) roads . . . and maybe even useful for normal, safety, efficient, driving??? In any such discussion you have to be careful of the usual me-exceptionalism which applies to pretty much everyone pretty much everywhere. Parking in Disabled spots because I'll just be a minute; that sort of thing.

We were cruisin' along a main N road at 80km/h when the speed-limit was 100km/h. Suddenly a big-arsed car overtook us by following the jink and swerve get out of the way y'dodderer protocol preferred by such creatures. I explained that, although it was strictly illegal, it was common practice, on straight sections of main roads in Ireland, for slower cars to drift onto the hard-shoulder to make room for those in a tearing hurry. Obligingly the silver car ahead of us proceeded to demonstrate a practiced drift-to-verge manoeuvre to give sea-room to big-arse.

Indicator lights are just that: indicators. I can't hear the dashboard tick of the indicators on my Yaris, because I R Old, so I often pootle along a straight road with no turnings telling everyone I'm about to turn. I am not the only one. A good rule of thumb is to ignore the indicators of all cars negotiating roundabouts. No advantage to lurching into the path of another car because they were indicating a left-turn. I am the only person who, to facilitate inter-driver comms, actually points at the direction I intend to take. That gives more confidence that I am actually going there rather than what my indicators are doing. 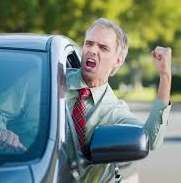 It is unsafe and illegal to make any hand-gestures Except!! to other drivers because they are open to mis-interpretation. ditto flashing lights: in Ireland, in city traffic, a super-brief flash of the headlights is an after you message; in Greece head-light flashes more usually mean stand aside, I'm coming through. But nuance is all: the length of the flash differs in the two jurisdictions. In Ireland a double-flash to oncoming traffic can mean speed-trap ahead OR rocks/sheep on the road. In urban traffic, where everything is much slower [although plenty fast enough to kill pedestrians] hand gestures do lubricate the social niceties and the flow of traffic. Humans have been using gesture since we were hunting mammoths so the body-language, and facial expression can add an awful lot of quite nuanced information to the basic hand gesture. In my 20s I had a couple of jobs driving vans for money and racked up a lot of experience for getting through my assigned drops as efficiently as possible; much of it by using non-verbal comms with other road users.
Posted by BobTheScientist at 07:30